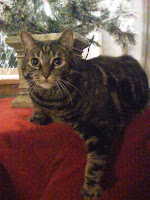 We’re adding Christmas to the house this weekend. I had to go and buy a new fake tree since Twinkle “enjoyed” the one last year so much and bent up all the bottom branches. This year I was rather concerned with what to get that they wouldn’t knock off the end table; I don’t put a giant tree up, just something that can sit on a table in front of the picture window. Last year I had to duct-tape the tree to the table to keep it from getting pushed to the floor, but since we have the new endtables I didn’t want to do that. So, while it’s a little unorthodox, I bought a “porch tree” for the table, it has a solid planter thing as a base and is much more sturdy. So far, so good, and it looks rather pretty, to boot. It’s pre-lit, so I threw on some ornaments and we’re calling it Christmas. 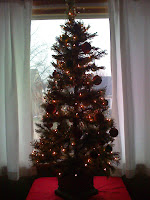 Of all the things we’ve lost in the house, I’m dismayed to report that we can’t seem to find our new digital camera. Hence the rather poor quality pictures of late, they are all from my new cellphone, which takes a rather poor quality photo. My old phone was a pain in the ass, but the pictures were generally better. Or maybe not, maybe it’s just like a lost love where you remember it more fondly than the reality actually was.

I spend far too much time on the computer messing around, accomplishing nothing. So this is going to be short, I’m going to aim for a little more productivity in my day. We’ll see if it works.

This past week for work a group of us went competitive shopping. We had a fun time, met a girl who works in Seasonal Product Managment, her brother works for Coach and she said she can get me anything I want with a 50% discount. That’s like unleashing a fat kid in Willy Wonka’s Chocolate Factory. I could feel myself salivating at the thought of 1/2 price Coaches. I have a working list already started!

As far as other Christmas shopping goes, I still have not purchased one thing yet. I need to get busy with that, I don’t know exactly what my brain is thinking, how it’s all going to magically get done. I’m stalled because I’m actually forcing Kenny to put some thought into the gifts for his family and so far he’s only nixed all my ideas and hasn’t contributed any himself. So we’re just at a standstill. I suggested a Netflix subscription for his mom, she loves watching movies at home and normally purchases them – why not just order them and send them back when you’re done? That idea was met with half-hearted interest. He better be coming up with something rather soon!

There’s a black cat who runs around outside, she looks just like our black cat Widda, so we’ve dubbed her “Street Widda.” Kenny came in distraught on Friday because someone hit Street Widda, or so he thought. It was a black cat, but not our Street Widda. He actually went back to see if there was anything he could do for the poor little thing, but there wasn’t. And that’s why cats should remain beloved indoor housepets.

Well, that’s all I’ve got so far. Maybe more words will pour forth later.

Peace, and keep your cockles warm in this cold Cleveland weather!