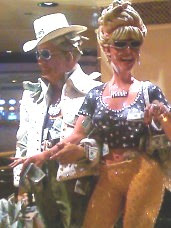 We have this coffee creamer, purchased from Sam’s Club, that requires it remain unrefrigerated. It’s a liquid. It looks and tastes like cream, but obviously it’s not or it wouldn’t remain “fresh” sitting on the counter for three months. Because it’s been there that long, as I said it was purchased at Sam’s Club, where everything is super sized. No wonder I don’t have counter space to bake Christmas cookies – I have a Sam’s Club creamer sitting out! Now the question that is begging to be asked is, “What in the hell is this creamer made of, where it doesn’t spoil sitting out for three months??” I see creamer-related maladies in my future. It tastes good going down, though – hazelnut.

Kenny’s been in Phoenix since Thursday on a “guy” trip with Timmy and Timmy’s dad Big Al. They’re staying at Ak-chin, which is a Harrah’s property so Kenny was able to get the rooms comped. He’s been gone a long time, it seems – I’ll be happy when he comes home! They went to a Browns party Saturday night at some bar, and then they are going to the game Sunday afternoon. Kenny said it’s been raining since they arrived, but since it snowed here, he has no room for complaining. He had been taking a bath at the gaming action, and since there’s not much else to do there he feels a little trapped an bored at the casino. Someplace he never needs to go back to, he lamented. Hopefully it turns around for him, I did a Voo Doo chant for good luck around my Haitian “man” doll. Someone asked me if the voodoo chants worked, and I said, “About as much as praying does.” So when things work out the way you want, it must have worked :).

This week I’ve reacquainted myself with the Pilates Reformer. As suspected, it owned me for the first couple sessions. Yesterday I was able to do it with a bit more ease. I need to head back up there in the next half hour if I’m going today. I hate their weekend hours, they close at 1:00 and that’s just when I’m getting geared up to leave the house. I feel very stressed for time, having to be someplace by noonish on a weekend. Especially this weekend, I’ve had a very bad bedtime schedule, up til all hours and then requiring a nicer sleep-in. I see an Ambien in my future, to help me reset my clock.
Saturday I spent the better part of the day winterizing the house. I saran-wrapped most of the windows, getting the giant pneumonia-hole in the living room covered, which was the most important window. It practically spans the length of the wall in the front of the house and it is drafty! Sitting in the chair, you can feel the whoosh of wind come in through the cracks if it’s not covered. So I strapped on my penis and became the man around the house once again. I also bought a new toilet seat; the Mailman installed the last one, but I’m going to try and figure this out myself. I’m invincible with my Bosch drill! Well, sort of. I tried to hang a mirror yesterday and it ended up crashing to the floor and breaking. Things to do today: Buy new mirror.

I am pondering following the Murdoch Rule for 2008. Rob is doing limited blogging so he can actually have time to write his next novel. I spend more time f-ing off blogging and rearranging Myspace, devoting no time to making my book happen. It’s hard to get underway, while this is very easy and much more fun, being creative without any sense of obligation. And I have a limited readership, I’m sure, so what does it even matter other than noting my life for posterity. My great-great-great-great relatives will discover I struggled to make a good cuppa coffee and I had deep-seated public pooping issues. Is this really the legacy I want to leave behind?? Well, maybe.

This was our view from our room at Caesar’s Palace. Not our first view, but the one we got after I threw a classic stink at the reservation desk when I informed them I wasn’t spending my vacation in the “Classic” section on the hotel. We all know “classic Vegas” = “old Vegas.” I had a stare-down with the front desk chick until suddenly a room became available. I took Geri’s advice to just not leave the counter. Eventually they cave, especially if you say nothing and instead just stare at them. We spent one night in the “classic” room, which turned out to be really nice anyway and I felt a little bit like an asshole, but by then had to switch rooms on Saturday after I had created the stink. Our new room was so great, even Kenny was impressed with the switch. We could watch the Bellagio watershow from our room – totally cool. 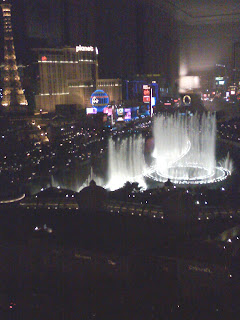 Monday night I have to go and pick up Newfie’s remains, the cremation is complete. I told Kenny that it’s my destiny, I will die a lonely old woman in my 1-bedroom apartment, surrounded by containers of pet ashes. I will now have 3 containers of them. Kenny’s question was, “Where will I be??” and he wasn’t too happy when I told him he won’t make it past 72, not with his inherited heart and cholesterol problems, while I would make it to at least 82 based on Sophie’s longevity. He was too…surprised, I guess, by my analysis to point out that both of his grandparents are still kickin‘ at 87 & 88. I figure I’ll have to catch another man in my senior years or die alone. I’ll be back on that Pilates Reformer at the age of 75 – now that would be a picture! I know, I know, it’s not nice to poke and tease about death. Blah, blah, blah. Get a sense of humor, People! As Rob says, “I keeed, I keeed.” Or something along those lines.
Get ready to hate Meggan right now: She has all of her Christmas shopping finished and wrapped, and her Christmas cards are ready for mailing. To date, I have purchased NOTHING. I don’t even know what/who I’m buying for this year. It will be a very limited list, I believe. It gets shorter every year. Gift cards for my nephews, I just need to determine the “from where.” Probably Wal*Mart, they can get a lot of stuff for the money, more so than from Best Buy. And I need to think of something for Kenny. I was pondering (it’s okay for me to post my ideas here, he doesn’t read this, he says he lives it and doesn’t need to rehash it) Sirius radio for him, something he can listen to in the basement and garage when he’s working. But I’m not convinced he’d use it – he never used the Bluetooth headset thing I purchased for him 2 years ago. Or I might order a leather jacket for him, maybe. He seems to like coats. I tried to do the old, “Let’s not exchange gifts, we’re going to Vegas for New Year’s” bit on him, but he squashed that idea. He’s been strictly instructed NOT to get me any giftcards this year. I don’t like the pressure that comes with having those. Now, I like them if they’re for the movies or a restaurant or hair salon – I go to those places all the time. It’s when he buys me a $300 card to Parmatown Mall that I feel pressured. I want to get myself something substantial for that kind of money, it’s my gift after all, and don’t want to squander it on 2 shirts and a moisturizer or some nonsense like that. Last year I bought a Coach purse and a pair of Nike Shox with the giftcard, and made him pony up the extra for taking the easy way out on shopping for me. Girls: We always cost the boys money with our made-up rules.

Sophie needs a new television. But that’s a pretty pricey gift to give at Christmas. Maybe Santa will bring her one anyway, she’s been rather good this year. Here’s a cute picture of her from Thanksgiving: 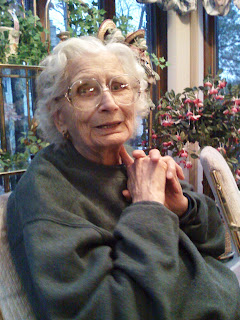 Other than Kenny and my nephews, I have to think about his family and they are very hard to buy for – very hard. They have absolutely everything. I think his dad is getting a heated ice scraper from Avon. I have a couple ideas, but really nothing much to go on at all. What do we get for his 88 year old grandfather?? Chocolates? He does like sweets, but we got him a big tower of that last year. He was an avid golfer, maybe a nice golf logo sweater, even though he doesn’t golf anymore. Then I have to determine who else …. I think this might be it. Maybe my sister-in-law, maybe. That’s about it. So with some intensive time spent online shopping I should be able to get it all wrapped up in a day.

Should it come as a surprise to me that the cats run from me when I try to pick them up?? Doesn’t Twinkle look HAPPY?!!!
I’ve decided to take my cue for the day from Stanley and stay home rather than battle the Reformer today. Even God rested on the 7th day. Peace and have a festive first-week-of-December. 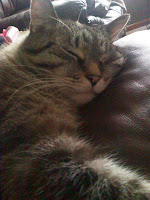