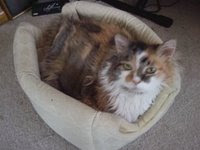 She was always a little bit different, this one. Not your ordinary cat. Right off the bat you could see she was different as she had a little stumpy fluff where a full size tail should have been. I found out that was her breed, Manx, and she had the distinction of being a stumpy Manx – meaning she had a bit of tail meat and fluff, but not much to waggle around.


Newfie joined the family in November of 1992 – a birthday gift to myself that year. I had just expressed my desire to add another member to the family and had requested a small little calico kitten as my desired kitten of choice. It was kismet when we walked into that pet store off of Great Northern Boulevard shortly after I threw my request out to the Universe. Two calico fluffballs were romping in the glassed cage.

Well, they were both just so stinkin’ cute, there was no way I was leaving one of them behind. We purchased both kitties for $35 each, plus tax, and promply delivered Newfie’s sister Naomi to my mother, who fell in love with her at first sight.

Naomi was named by my mother after a character on Mama’s Family. She was the lucky one 🙂 Newfie got her moniker because she was….well….the New Cat in the house. Clever, I know. Newfie just sort of morphed out of New Cat on it’s own, and at least it did add an element of cute to the name.

While her name wasn’t very cutesy or common, there isn’t another name out there that would have been better suited for her. She was a Newfie through and through. Little. Yellow. Different. That was my Newf.

Newf was a tiny little thing until one day it was observed, “Newf’s getting a little fat.” It seemed like overnight she went from being a well-porportioned kitten to a basketball-bellied cat. She liked her food! And really, what else did she have? She was spayed. She wasn’t allowed outside. Her lack of a tail, which acts as a stabalizer for cats, made it really difficult for her to maintain her balance if she jumped, so she pretty much ceased all activities that she couldn’t do from the floor. So she ate.

Newfie became a fast favorite with everyone who met her. She had a gentle personality that demanded nothing more than some occassional attention. But boy, when she wanted attention, she demanded it! New didn’t have a common cat meow, she instead made a noise that sounded like a gutteral shout, “Maakah.” It was very discernable. As she couldn’t hoist herself up onto any of the furniture, she would stand at your feet and bark, “Maakah” until you picked her up and held her for as long as she deemed necessary.
Some years ago she was diagnosed with diabetes. Probably due to her penchant for food and lack of activity, one would guess. Newf required a morning and an evening shot of insulin (the same type people use) and she took those shots in stride – she rarely complained, and when she did it was more than likely deserved for jabbing her a bit too harshly. Everyone learned to give her a shot, even those who were at first relunctant. The reaction was the same for everyone, too, “Wow, that was just so easy!” No problems, that summed up Newfie’s life. She rolled with it and everyone around her did, too.
Despite her size and lack of agility, she had a few catlike abilities that she was proud to showcase. She had lightening-fast eye/paw coordination and could catch a housefly or bug in midair. Now, those bugs would have to fly into her “zone,” she wasn’t going to chase them – that’s crazy talk. But if they were unfortunate enough to fly within paw’s distance, she owned ’em.
Newf could always be found in one of the same few spots around the house. She liked to sleep in a box lid, her cat basket, in a little corner nook of the living room, or lying near her food or water dish. She was too lazy to stand to eat or drink, she instead just laid by the bowls – and she’d stay there for a good while, just in case she got a bit parched or needed a quick nibble. She took her laziness to the extreme at times and wouldn’t even dip her head into the water bowl; instead, she’d dip her paw into the water dish and then lick the water off her fluffy paw soppers. Now that’s a lazy cat, and Kenny swears that Caesar picked up this little habit of hers and that’s why he now dips his paws into a freshly poured cup of coffee and licks it clean! Newf’s left her legacy behind.
She got very sick very quickly. On an ordinary Sunday in November, she just wasn’t herself; she had no appetite and was very weak, she could barely stand up. A subsequent trip to the pet emergency clinic helped in the short term, but she never quite fully recovered. The wonderful Dr. Fred and his staff at Cloverleaf Animal Hospital worked with us to try and get her back on track, but the efforts didn’t last long and were, in the end, futile. It’s suspected she had cancer, but we don’t know for sure. She died the day after Thanksgiving, November 23, 2007, while in the care of the veternarian. There are no words that can adequately express the loss of a beloved pet – faithfully loving, always accepting, forever welcoming. I was the lucky one, to have had her in my life for 15 years. Rest easy, beloved Newfie. Mama misses you.

One thought on “With Love, My Dear Friend”