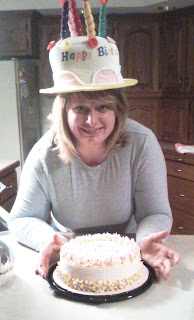 Where to start? It’s been a jam-packed week, and it was Birthday Week to boot, which made it special on it’s own merit. It wasn’t always a “good” busy either. The week was fraught with cat strife, with many trips back and forth to the vet. Luckily we have her a bit stabilized for the time being, and after Saturday’s visit where she received a steroid shot she’s even started to eat a bit. The vet has admitted that he just doesn’t know what’s wrong. She has signs of pointing in one direction, but then the symptoms stop supporting the theory. So we’re just trying to get her to eat, drink, poop and pee in a normal fashion – the basics are all we’re asking for and it seems we’re getting back on track a bit. For the time being, at least. I was very concerned about going out of town next week with her so iffy, but I spoke with the vet and I can board her there for $16/day – which is quite a bargain! We’ll be taking her down there on Friday morning before we jet off to Vegas. I feel much better leaving with that plan in place. Here’s a pic of her on one of our trips to the vet – she gets wrapped up in a fleecy blankie and does just fine riding. 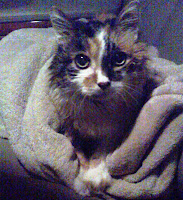 I think I hate my new cellphone. Hate it, I say. It’s confusing to use, I have repeatedly dialed my grandmother as she’s 1st in my fave fives and hitting “send” doesn’t dial the last number called like my last phone, instead it dials Sophie. I can’t send pictures to emails, I had to set up a T-Mobile album thing, the pictures – as you can see – are lacking in quality (although none of the pictures have had ideal lighting). Anyway, I’m just disgruntled beyond belief with the whole situation.

With all the cat drama of the past week, as well as shitty work deadlines, I completely missed my hair appointment with Sarah. Geri saw her on Wednesday and Sarah told her to tell me she’d do me on Saturday (my birthday) over her lunch hour. Well, I was all set for that, but we found ourselves at the vet again and I had to cancel my appointment with her. Fearing I would have to go to Vegas with trailer-trash roots peeking though, I tried a new option in my neighborhood, which Meggan recommended. Meggan always has nice color, so I figured why not give it a shot and they actually had appointments available on Sunday, which is just unheard of, being open on a Sunday. I happily made an appointment, even though Meggan’s girl wasn’t available. I figured – again, naively – that anyone could do a good job – it’s just hair, they’re not splitting the atom.

Well, let’s just say the results were less than desirable. They ASSURED me they could match my current base & highlight color, that they used Aveda color and it wouldn’t be a problem. It’s not even close to what I had, and the chick didn’t use the Aveda color, despite the fact I requested it when I made the appointment. She had my head halfway done before I realized it was all fucked up. I didn’t even get a style or blowdry, and it was a very basic trim, and I almost fell over when I checked out – $150. I asked to see a breakdown of the bill, since that’s more than I get charged at John Roberts, and that includes a blowdry/style. Anyway, no sense in getting into it, but when they asked for my personal info for their computer, I told them there was no need, I wouldn’t be back. And then once my hair dried and I realized how bad the color was compared how it started out – not even close in color – I called back once I got home and went off on them. They offered to let me come in for a redo, and I asked why in the world would I let them touch my head again when they couldn’t get it right the first time – that’s piling bad hair on top of bad hair. No thanks. Although I do think I’m not quite done bitching with them, I think I want some money back or free product or something. At least they know I’m pissed off and unhappy. Meggan, rest easy, I never gave them your name so they won’t take it out on you when you go back. It’s my own fault for just going with whoever and straying from the recommended girl. Live & Learn. Luckily, it’s hair and it grows, but the $150 price tag for shitty hair really annoys me. Still. I still haven’t calmed down about it! Kenny said it doesn’t look that bad and I told him to shut the fuck up.

Okay, that’s 2 bad things. Let me think happy thoughts for a moment….ah…breath in, breath out.

Oh, one more bitchy item. With all the commotion this week I was unable to make my 2/times week commitment to the gym so now I’ll be locked into a contract with them and have to pay an extra dollar per month. Double Fuck. And it’s probably going to be like starting over when I get back on that Pilates Reformer – I haven’t been acquainted with that in a week. I think it will own my ass again tomorrow night.

Wednesday night was the very fun Garth Brooks “concert” at Cinemark. We met Dan & Bev and Kim & Jim at Quaker Steak for a dinner and beer beforehand. 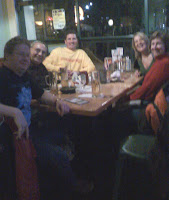 The concert was very fun, really good – but he’s lookin‘ old! There is snow on the chimney! I’d still do him, he’d just have to leave his hat on 🙂 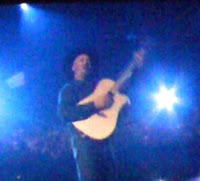 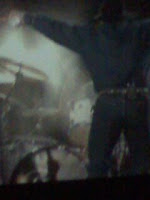 Thursday night was the Karaoke Radio Contest finals at Howl at the Moon. We got down there around 7:30 and it wasn’t over until about 1:30 a.m. – CRAZY long night. I was CRANKY by the end, there was no reason to drag it out over that many hours, but the numbnuts that planned it (not Kenny) were trying to milk the bar tab as much as possible so they dragged it out. I was shot for work on Friday, not sure how I managed to get through the work day, but I did and I was even productive. The Product Management girls and Rita from my new department were all going out with me for Birthday Cocktails after work and I was already dragging from being out on Wednesday and Thursday, but I figured I could handle it – I’m not old yet! I can keep up! Or so I told myself….

I had a really good time with Rita, Emily, Chelsey, Kristin & Stefanie – always a good time. But I had to cut my own party short because Kenny made dinner plans for later – 8:30 – with some friends, so I went from one outing to another. It was very rushed for me – I guess that’s the one of the hazards of being so popular!

Last night Melinda text-messaged me with the news that my nephew Justin was in another car accident. She said he’s fine, but the car was totalled. I am ashamed to admit it, but I haven’t had the chance to sit down and call to get the details yet, but since she said he was fine I didn’t have a big sense of emergency. If the message can be conveyed via txt msg, it couldn’t be that harrowing. But I’m sure glad he’s okay – I wouldn’t have needed bad news this week – it’s been a struggle to get through for me, really stressful overall.

For my birthday, Kenny’s mom Linda and his grandparents took me to dinner at Home Town Buffet Saturday evening. It was quite the festivus 🙂 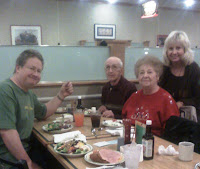 After we ate we went back to Marge & Stanley’s for ice cream cake and presents. I got quite a haul! Marge & Stan (well, more Marge I’m sure) bought me a new Liz Claiborne purse that is very fun, and Linda got me a small MP3 player along with all the necessary accessories. It’s super-cool, I’ve never had one before, and I’ll be able to use it at the gym – as well as at work. She bought the speaker stand thing for me so I can plug it into that and get some really great sound. I need to read up about it and get it all figured out, but haven’t had a chance to yet today. 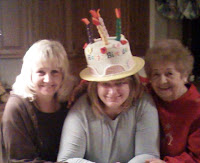 The house is totally trashed, we’ve been steam cleaning the carpet and shit is absolutely everywhere as a result. The carpet smelled, I think my sick cat inadvertently peed the night she had her seizure, and it was killing me to walk into the room – I wanted to go sleep in a hotel the other night, I was so sick of dealing with everything. But then I realized that might be a little extreme and now we’re cleaning the carpet.

I would have to say it hasn’t been the most carefree birthday week to date, but since we’re leaving for Vegas on Friday I wouldn’t complain too much. Well, I think it’s too late for that, so instead I won’t complain anymore. Anymore than two more things…or so. But nothing more for right now, how’s that? I’m exhausted, blogging off and going to clean the kitchen, which is a disaster since I embarked on a whole cupcake baking and decorating extravaganza for my birthday treats for work tomorrow. Why couldn’t I just buy bagels?? Well, because I bought these really cute decorating bottles from Pampered Chef and wanted to try them out, so there ya go.

Peace, and I hope we’re all fortunate enough to make it to another birthday!