Oh, sure, she looks innocent enough. So who would’a guessed how she would spend a Sunday afternoon when she had a few loose hours to herself. Stanley (the grandfather, not the cat or our nasty neighbor) was at a clambake at Mapleside Farms with Kenny and me, along with some other random family members. Margie, having no use for clams or chicken, passed and stayed home.
What to do, what to do?? ~finger tapping on forehead~ “I know!” Marge said to herself, “I’ll watch a little PORN!” Margie’s 87, and Kenny’s grandmother, by the way. She’d been hankering to see My Night in Paris, the Paris Hilton sex-scandal tape, so Linda obliged and ordered it up for her for $3 from Ebay. Good ol‘ Ebay! Stanley had no interest in it, so Margie was courteous and waited until she had some “alone” time. While we were at a clambake, Margie was watching some bearded clam action. Bad, bad pun. But nevertheless. Marge watched it from beginning to end, and has deemed Paris, “a Pig.” I asked her why it was wrong for Paris to just want to express her love in a physical manner, but Marge wasn’t buying it. She’s still “a Pig.” It took her the entire hour and a half to determine that : ) Yes, she watched the entire porno, which is more than I’ve ever managed – 10 minutes is usually plenty.
Marge also pointed out that Rick Solomon’s weiner is HUGE – 2 fistfuls and still some left. She demonstrated the size on a straw while we were at Wendy’s. No wonder I love this family! I’ve asked if we can watch it on Thanksgiving so I can see it – ya know, start a new Porn on Thanksgiving tradition. Nothing brings a family together like a good porno.
It’s my most favorite day of the year today – Daylight Savings, when we fall back an hour. Back in my younger days, I never missed the opportunity to be in a bar with my friends on this very special day. Just when you thought it was time for the fun to end, there was a whole extra hour for more shenanigans – and then the extra hour to sleep in the next morning, too! A glorious time, as I do love my sleep. Is it called Daylight Savings in both the Spring and Fall? Cause at some point it’s not saving daylight, it’s losing it – isn’t it?? Very confusing, but the extra hour of sleep is not.
I’m happy to know that I still ‘got it’ with some of my rituals of youth. Last night Ken and I went all the way Downtown on a Saturday night, just like the young kids do 🙂 We met my friends Rob and Beth at The Improv after they enjoyed a fancy dinner at The Ritz. They had Ultimate Date Night, we had a slice of it. Kenny and I enjoyed an informal dinner at Rock Bottom Brewery before the show, where we swilled some fine beer and I ventured into a meal I normally avoid, Sashami Ahi Tuna. I keep trying to like the raw fish, and while I do like the flavor of the tuna, it all breaks down for me on the visual. Kenny ate most of the big raw pieces of tuna and he shared his asiago chicken dish with me so it worked out. I’m not ready to stick a whole wad of raw fish in my mouth just yet. Anyway, I’m surprisingly off topic again. We had a really fun night at the comedy show and had about $17 worth of laughs, I would say.
So. Another coffee pot fiasco this morning. 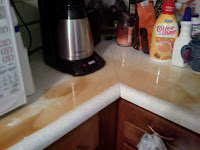 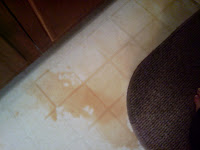 I must say, this totally infringed on my enjoyment of Daylight Savings Morning. I sprang out of bed like a spring chicken at the crack of 9:30 this morning (the clock said 10:30, I felt so on top of the day!). Plans were to sip a hot steaming cuppa coffee, leisurely blog and check the ‘net, throw on some sweats and head to the gym for an hour and it would all be accomplished before noon. The best laid plans of Mice & Men…..

The first pot (yes, first) leaked out all over the place and as I was cursing and cleaning, Kenny came into the kitchen and started to “hump” me from behind. As I’m cleaning up the mess. So he got a wet washcloth to the head and was put on clean-up duty. The mess was brought under control and Round 2 of coffee making ensued. We let it do it’s thing and when we checked on the progress, it was a bigger mess than the first time. Kenny took apart the lid, it must have had a clog of grounds in the dripper thing and was jamming or something. While he worked on that I headed to the basement and brought up my trusty old Mr. Coffeepot, which I’m keeping as an In Case of Coffee Emergency backup for situations like this morning. Well, we tried one more pot with the cleaned out dripper and we were finally met with success. But my “saved” hour of daylight was gone. Instead of my lofty visions for the morning, we settled for breakfast from McDonald’s and skipped the workout for the time being.

I’m actually heading out to the gym in a few minutes, much to the protest of my thighs. I tried the Pilates Reformer machine yesterday, which promises a lithe, ballerina-like body in as little as 30 days. It seemed simple enough, you bounce around on a horizontal trampoline-like mechanism, which is hard to adequately explain, so I won’t attempt to. But I did it for the duration of the DVD and it seemed stupid and simple, until about half way through, and then….well, I had worked up quite a sweat and my legs were in trouble. It’s deceptively simple. I am heading back over there and going to try ‘er again, I want to see if in fact a ballerina does reside beneath my skin. Kenny says no, not the way I clomp around. Thirty days and we’ll see 🙂

Jay-zus H. Christ. I just got back from the gym, Day 2 of the Reformer. I am not exaggerating here, I almost had to yell for assistance to get up off the machine when I was done. I could not hoist myself into an upright position, my abdominals and legs were not cooperating. It was sheer strength of determination – and “throwing” myself into a pulley to leverage myself up – that got me up off that machine sans assistance. Good Lord. But, I prevailed. I believe the Hidden Ballerina doesn’t really want to come out yet, but I will continue to coax her along.

It’s going to be a busy month. I have the Keith Urban concert with Jill next Friday, the Garth Brooks movie night on the 14th, a birthday night out with the girls on the 16th (I hope this time I don’t end up puking in a parking lot) and then the holiday and Vegas, baby! What a fun month for me!

I missed Meggan’s Famous Pumpkin Pie last week, but I’m hoping to enjoy an entire pie myself before the season is over. Pumpkin Pie is a season unto itself, isn’t it? Hint, hint, Meggan…

Much like the ongoing coffee pot drama, I am still plagued with cell phone woes. I cannot figure out how to send pictures to my email, it asks for all sorts of “server information” and whatnot, and it’s just perplexing. Also, I need to switch it to my old phone number, I keep getting lots of wrong numbers with the new number they assigned. Annoying. It was on my agenda to go back up to T-Mobile today, but I don’t think I’m going to make it there. We’re heading to Champps to watch the football game at 4:00. Should be fun.

We went to the new house yesterday. It’s quite stately. 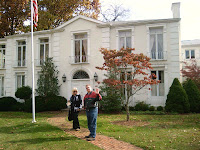 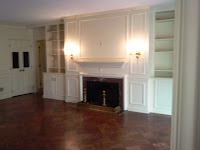 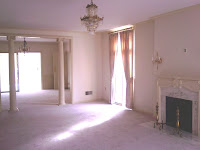 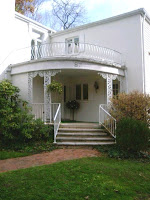 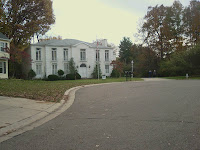 I’m not sure I could ever imagine living here, not that I’ve been actually invited to move in yet 🙂 It’s very big, though. Linda is going to put a big wooden deck across the back, top and bottom, and it has a really cool enclosed sunporch with skylights, which is my favorite part of the house. Kenny loved the elevator, he kept playing in it. We couldn’t convince Marge to take a ride. It still has residents in the lower unit, they’re moving out at the end of the month and then it will be vacant for a bit while it gets some updating.

I just informed Kenny that I’m not marrying him, he’s too messy, and he had the balls to play the Who’s Driving The Messiest Car card. And then he methodically pointed out all of my shit heaped on the coffee table, which was about half of the shit. So we’ve determined that we’re both slobs. We need a Wife. He said I can choose to not marry him, but not for the “you’re too messy” reason.

And there’s my cue to quit burning daylight on the computer and go get some stuff done around the house. Or read a book and/or nap with cats. It can go either way in the next ten minutes.

Peace, and enjoy your extra hour of life!