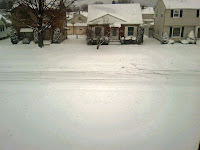 Snow arrived in a flurry this past week, getting the Christmas spirit awakened. The first snow is always interesting because traffic just comes to a standstill. For some reason, people forgot what to do, even though it happens every single year. I live about 15 minutes from work under normal conditions and it took me a good 45 minutes to get there on Wednesday. Everyone else I know who lives further from me had a good 2-hour drive that day. The picture is the view from my front window Thursday morning – it is Cleveland in December for sure!
The story that haunted me this week was the search for the missing family in Oregon. It was just a really bad decision that didn’t end well at all for the family. Taking a wrong turn. I guess that’s what life is really all about, though: trying not to go down the wrong road. Sometimes we make wrong decisions that end up costing us dearly. Then you just have to get back in the drivers seat, sometimes without those you love, and keep going.
Fran’s husband was so freaked out by the story he immediately went out and bought an emergency kit and a space suit of some sort to keep in the car.
Work finally returned to a normal pace. I was home on time – or thereabouts – each day, and I actually got to go to lunch with the girls 3 times!! Yahoo, we got to finally catch up!

Wednesday night Kenny & I went to meet my friend Lora & her husband Tom for dinner at Applebees in Macedonia. I was dead-tired when I came home Wednesday but was looking forward to seeing them. I took a 15 minute cat nap (with a cat, of course!) before getting up and refreshed for dinner. We got to Applebees on time and as I looked around and didn’t see them I asked Kenny if it was the 12th….he said “you’ve got to be kidding me…” of course it wasn’t the 12th, I was an entire week early. That either shows how hard I’ve been working that I’ve lost track of time, or that I’m really 40. So we had dinner and enjoyed the smoke-free bar environment before we went to Akron to play some “games of skill” since we were practically there anyway. Next week we’ll be dining with the Oborn’s, but we’ve since picked the Outback since Kenny and I just had dinner at Applebees. Good lord, what’s wrong with me!??

Things were slow enough at work that I took an impromptu vacation day on Thursday. We didn’t do anything very exciting during the day, but I was able to rummage through all my stuff from storage and find some of my Christmas wrap and decorations. That evening was a party at the Blue Moose in Parma for my golf league. We do a $10 gift exchange which is always fun. I took the smallest package because I just don’t need more crap in the house. My prize was a can of Pringles & lottery tickets. I was thrilled – two things I like! I was a lucky winner of $8. Kenny said the gift I purchased was the worst thing ever. I don’t want to reveal it in case someone who knows the gift is reading this…..Kenny said I bought a Zoink. I thought it was kitchy when I bought it, but now think he’s right and it was a Zoink. Oh, well. I’m sure it will be regifted. 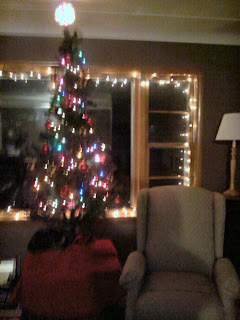 Friday night I put the Christmas tree up, much to the delight of the cats. I have it sitting on an end table in front of the picture window and I’ve had to duct-tape it down under the tree skirt. The shiny cat toys hanging off the tree are quite a temptation and hard for Twinkle & Caesar to resist, but so far they’ve respected the spirit of Christmas. We’ll see if it actually makes it to the 25th intact. It may be asking too much. 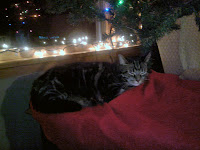 I watched 2 good movies this week, which is really a surprise because I rarely watch movies at home. I stick to the sitcoms or hour long dramas usually. Friday night I watched a movie on HBO, A History of Violence. It was really …. hm …good I guess, in a dark way. It really drove home the point that you don’t really know anyone. And it had some very graphic sex scenes which kept me thinking all night. And today. And now. I guess I would recommend it!
This evening I watched Crash on Showtime. I hadn’t seen it when it was out, but I’m really glad I caught it. The story was thought-provoking and it was a lot better than doing the piles of laundry waiting for me in the basement.
Kenny’s off running the sound for a show at Swingo’s tonight. He wanted me to go with him but I opted for the couch instead. Boy, I really am 40!!
Peace & stay safe!