I am so so so gol’darn tired right now, Reader, and my words feel dried up. But come on, Me. I’ve posted twice this month? That’s ridiculous. Certainly I’ve had more to say. But let’s go back to I’m just tired.

I didn’t sleep well the past few nights. My Mister and I stayed up waaaaay too late watching The Queen’s Gambit, and it had me tearing up and clapping and shouting and yelling hooray! and then it was over and now I’m sad that there’s not more of it and I had to take a long afternoon nap because see sentence above about not sleeping well. I’m just in a bad pattern, and I want to be in a good pattern, but here I am.

Thanksgiving was this past Thursday and it was a quiet-ish event, as most people experienced. We had one guest and then a couple folks stopped over later in the evening for pie.

Because we had pie. Many pie.

We had so many pie because My Mister asked me what kinda pie I wanted for the holiday and I replied, “All of them.”

I didn’t want to be selective. #AllPiesMatter 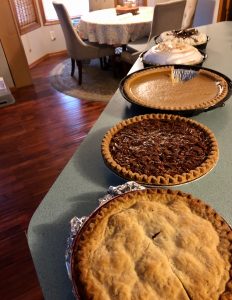 My Mister: “We don’t need all of the pie. It’s mostly just going to be the two of us.”

Trixie: “If we don’t have all the pie, Covid wins!! And I refuse to let that bitch win!”

So My Mister went to four different locations to pick up all the pie for me.  He was definitely speaking my love language.

We had pumpkin, pecan, razzleberry, french silk and lemon meringue. Ladies choice of cool whip or vanilla ice cream, or both should Lady desire.

I made the “don’t ever do this after you’ve eaten five pies and are super tired and also feeling a little fragile” move of weighing myself this morning.

We have two scales in the bathroom.

One is named Mean Scale and the other is named Even Meaner Scale. Even Meaner Scale clocks you in about 2.2 lbs. more than Mean Scale. I don’t know why we have two scales in there, but we do, and we look at the numbers of both of them, and then don’t use that data to influence our decisions at all. Obviously. But we are aware of the data.

This morning, Even Meaner Scale was truly rude.

I used that information provided by Even Meaner Scale to eat the last slice of lemon meringue pie like a barbarian standing over the countertop, straight from the pan. My thought was to just clear it out so we can start fresh on Monday morning. It was a strategic move, Reader.

Taco the Outdoor Kitty Raccoon did eat a good amount of pie, including pumpkin and pecan. She never once feels bad about her body image. She’s a smart taco.

We are getting a big snow storm sometime tomorrow and just today I was standing outside with the 60-degree sun on my face, listening to my positive mantras and grounding my bare feet in the grass to do something with my ions and align my root chakra. There’s a lot going on at Chez Bang Bang. All the time, a goddamn party.

My Mister just informed me we’re going out for more pie, before the snowstorm hits. Pizza Pie. I’m going to let it hit me right in the eye.