I’ve spent a considerable amount of time during the ‘Tine of 2020 on my deck this season, Reader. Coupled with my five-minute yoga moves which force me to look up and stare off into space during a lot of the moves, I’ve seen some things.

Maybe not as many things as my neighbors have possibly seen, because let’s recap: sometimes I yoga without clothes on out here. It’s just quite freeing and also I have a possibly false perception that I am invisible out here.

What I’ve noticed lately, and became my Mission, was that my trees are filled with a canopy of grapes. 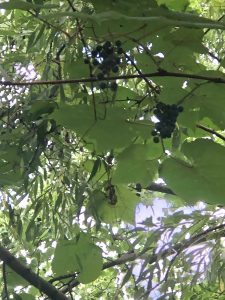 I became determined to find a way to sample what could possibly be the best wild grapes in the entire universe, growing right here at Chez Bang Bang.

Yes, I believed they could be that good. 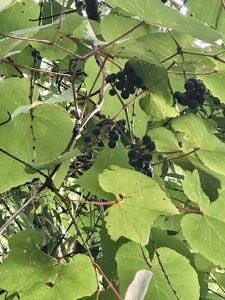 I went to the garage and grabbed my long-handled grabby-pully-cutty tool and got to work harvesting.

Except. I was just a teensy weensy tich too short to reach the vine without standing on a ladder.

And I’m not standing on a ladder, on my deck, which is a whole story up off the ground, because I can see the makings of Disaster as clearly as I could see those grapes.

My balance isn’t ideal on an ideal day.  Couple that with my still-ouchy-from-surgery stomach and a great big pain in my right side when I reach and bend that I’ve had since surgery, and there was no way I was climbing a ladder with a grabby-pully-cutty tool in hand, then trying to reach up to the sky with no hands on the ladder. Not even the allure of the possibility of the best grapes in the universe could sway me into making that bad decision.

So I did what any industrious person would do, and I called for the person who’s taller than me to come out and assist.

My Mister was less than thrilled by this endeavor.

My Mister: “I don’t think you should be trying to eat those grapes! What if they’re poisonous, like mushrooms?!”

Trixie: “That is crazy talk. There are not categories of poisonous grapes. Now reach up there with the grabby-pully-cutty tool and bring that vine down to me.”

The vine was a bit more difficult to grab and pull down. Let’s just suffice it to say a lot lot lot of swearing happened.

And then My Mister got super flustrated (yes, flustered and frustrated, it’s a word ), and his face turned red and he wanted to throw the grabby-pully-cutty tool at me but didn’t, and declared, “This is FUCKING STUPID and YOU’RE STUPID for wanting to try those poisonous grapes!”

Except he didn’t actually say “You’re stupid,” but I could feel the thoughts swirling in his brain.

So I grabbed the grabby-pully-cutty tool, and because My Mister had managed to somehow get the vine a little closer, I was able to reach it and snip off a bunch and into my hands. And no, I don’t have a photo of my victory, and I’m disappointed in me that in my excitement I neglected to photo proof the evidence.

The grapes were smaller than the size of a dime, but perfectly purple and ripe. I plopped one into my mouth, much to My Mister’s disgust.

Trixie: “They’ve been hanging in the sky, what could possibly be on them that needs washed off??”

I was undeterred, because I’m an adventurer. I should have my own adventurous eating show.  Things I’m willing to put in my mouth without washing them. It wouldn’t be the first thing if you know what I mean, Reader. I’m not sure that you do, because I’m not even sure myself, but it sounds slightly scandalous and adventurous.

Upon tasting the wild grapes, I was disheartened to learn they are not, in fact, the best grapes in the universe, and are mostly comprised of seeds. The seeds were more than the grape meat.

Overall the taste wasn’t offensive, and I even convinced my Doubting Mister to adventure-taste with me and he tried an unwashed grape himself.

But because of the heavy seeding, I have concluded they are not worth My Mister’s fury in trying to harvest them. They shall be left to the birds and the squirrels and not stomped into wine or jelly for myself. And my weekend just got a little more freed up, which is why I had time to blabble (yes, blabble, babble + blather, it’s another official word ) on here. You can thank bad grapes for this, which would probably be the first time you’ve ever thanked bad grapes for anything. If it’s not the first time you’ve ever thanked bad grapes, please leave a comment and share the details of that story because I’d really like to hear.