The Bang Bang Theories
Let's Be Friendies
Last weekend I returned from yet another week on the High Seas. Yep, Reader, if you’re counting, that makes my fourth cruise for 2015. So basically, a great year.  I should write a book on How to Do Unemployment Like a Boss. Except now I’m working again, and it’s all I can do to scratch out a few words for you here. Although, I am picking up the pace a bit, thanks to Liz Gilbert and Big Magic. This might be the only thing I leave behind in this life, which is sorta sad, so I guess I’d better go plant a tree or something to make up for it and then people will be all, “See that tree? Trixie Bang Bang planted that!” instead of, “Did you read that blog where Trixie Bang Bang talked about cats and vaginas, but not at the same time because that’s sort of weird and even she had boundaries, albeit limited.”
I’m frankly not sure which is better, Reader.  I don’t especially mind if this is my magnus opus,  rather than planting a tree that could be washed away in a rainstorm or bulldozed to build a new parking lot. See how I’ve just rationalized sitting at the table drinking coffee vs. digging holes outdoors?  I’m genius, Reader, pure genius. This is my legacy.  I’m doing it for the future.
Anyway, back to point of this, which is I went on a lot of vacations this year, and always always always when I come back I have a few staple resolutions for Back From Vacation Me.
None of them are any fun, Reader.  They go something like this:
That’s a pretty shitty resolution list and no wonder I hate coming home from vacation, where the good times roll.  I’m constantly looking for the next trip, I need to escape my own insanity.
I even have much shorter-term goals that I lay on myself, which are mostly just as unpleasant.  This is my actual to-do list from my first day back from vacation.  I had lofty goals. 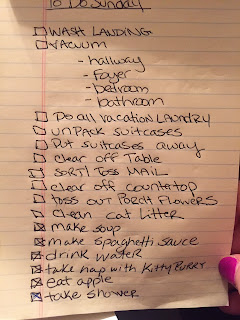 The list originally stopped at Clean Cat Litter.
By 6 p.m. on Sunday I realized I hadn’t accomplished one thing on the list and was starting to feel like a Sunday Fail.
So I did what everyone should do in that situation, and I modified the list.
With things I had actually accomplished that day, therefore able to check right off, pat myself on the back and sit down for an evening of t.v. that needed to be watched, which was equally important and should have been the VERY FIRST THING on this stupid list. Because Walking Dead premiered while I was sailing around the Caribbean and I had a much-needed date with Rick Grimes & Friends.
But did I even put that on the list? No. Because sometimes I am a dolt.
Sometimes you need to celebrate the small accomplishments, Reader. 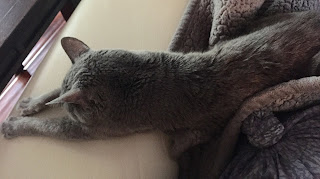 Lest you think she’s too adorable here (which she is), two nights ago she peed on me.
While I was in bed.
She backed up against me and peed. on. me.
So, less adorable.
Not only did she pee on me, but it sort of ricocheted off my back/butt area and splattered right into My Misters open mouth, mid-sentence.
So yeah. I think she was expressing her disdain that the Clean Litter Box check point wasn’t done to her satisfaction. While the litter pans did get scooped, she wanted the floor mopped, too. Since I’ve tidied up her area we’ve been incident-free.  Which is lucky for her, because she was thisclose to having a similar outcome as the itsy bitsy spider.
This is the second Golden Shower I’ve gotten from Purry, by the way. It always comes down to my not meeting her litter box needs. She definitely makes her point.  And gets results.  So basically, we should all just piss on whatever / whoever isn’t meeting our needs.
Don’t think the donuts are fresh enough? Piss on the baker.
Don’t like sitting in traffic in the morning? Piss on the other drivers.
Don’t like the line at Target? Piss on the people in front of you. But not at Walmart, because they may take it as flirtation.
So yeah.  The moral of this story is to set realistic goals so you can feel like a champion, and learn your pets Love Language before you get a very unfortunate lesson at eleven o’clock at night.