The Bang Bang Theories
Let's Be Friendies
“Her boobs are sooooooooo biiiiigggggg…..”
“HOW BIG ARE THEY?!?!??” – The crowd shouted
“Her boobs are SO BIG, they were invited to join a special boobie-treatment care facility.”
Yep. Trixie’s Boobs have joined a care facility. They’re members now. Or will be in two to three weeks, once the paperwork is processed.
It all started with The Spot.  I’ve posted a sort-of gross-ish picture of The Spot, so you, Reader, can appreciate just why exactly I was a tich concerned when this just popped up on my freckle-y chest one fine summer morning.
See? It’s red and has raised edges and looks mean. 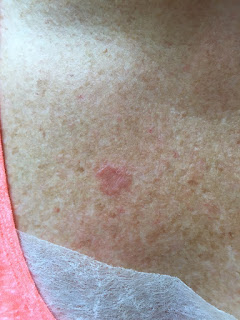 One thought on “Spot-On”