The Bang Bang Theories
Let's Be Friendies
Look what I found while I was shopping at The Walmart around 12:30 a.m. on Friday night, Reader.
I’ll let that whole sentence soak in for a moment, because it tells a story about the fabric of my exciting life.
Friday night. The Walmart. Ridiculous hour.
I was not wearing pajama pants, or see-through nude leggings with a shirt not quite long enough to cover my ass-crack, sadly, because had I pre-planned my late-night visit  to The Walmart a little better, I could have been a feature on the next installation of The People of Walmart and made myself Internet Famous.
But it was a spur-of-the-moment trip, so I was in boring jeans and a winter coat, like a lame suburbanite housewife.
We went for pain relievers and some sort of Ben-Gay type product, because my Poor Mister has pulled a muscle in his leg or something, and he’s got a knotted-up spot about the size of an egg on his thigh. He was smarting from that, and so I made a late-night trip. Because I’m not always an awful girlfriend, despite what you might think, Reader.
I’m nice.
Sometimes.
You know what’s not nice?  Nabisco.
Because while I was at The Walmart, I saw these on an end cap, and stopped in my tracks with a What-the-Mega-Fuck look on my face.
MEGA STUF OREOS. 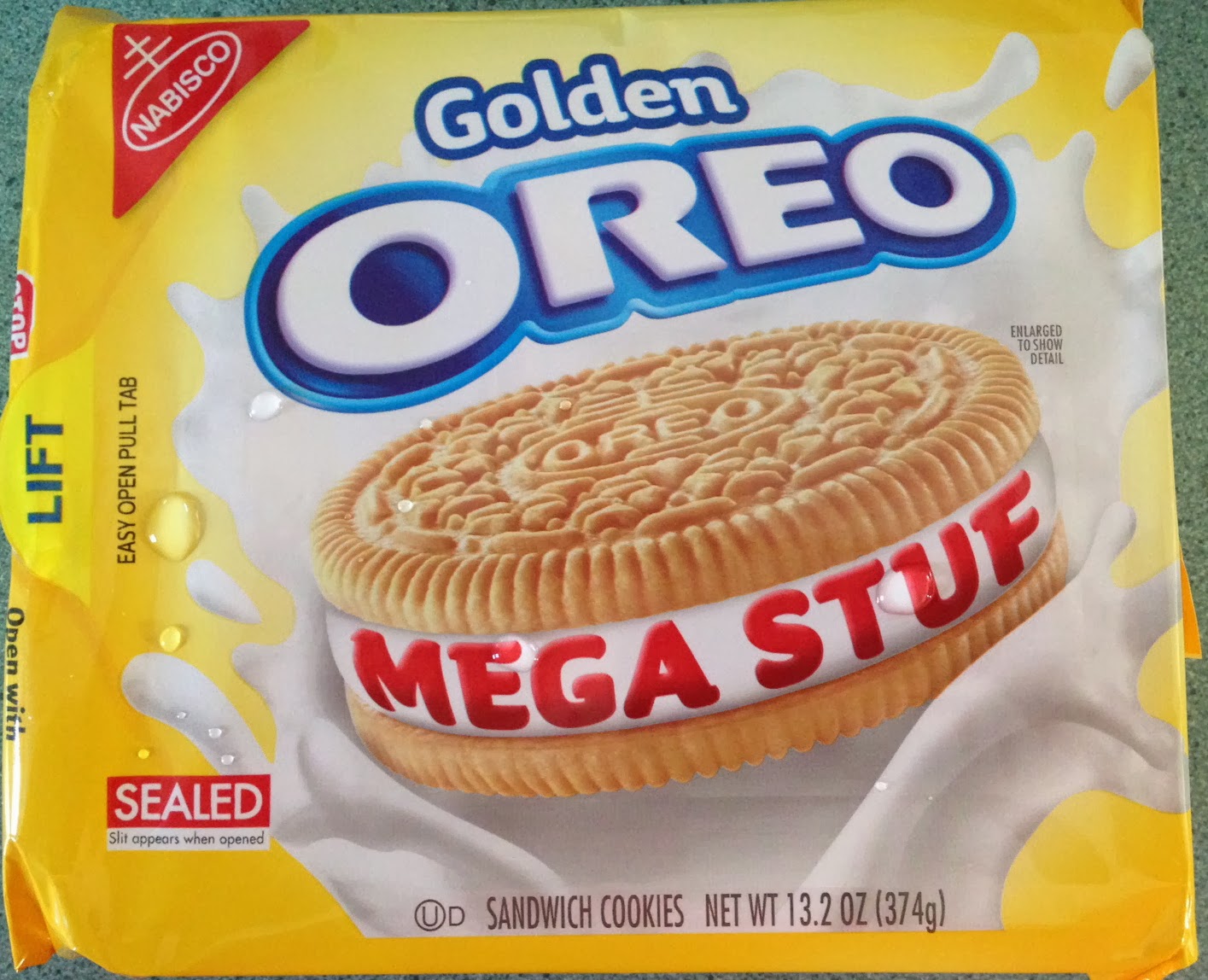 Which, really, I think is just what the original Double Stufs used to be like, as I have proclaimed before. They have completely chintzed up on the stuf, not that any of us really need that much stuf in a cookie.
Of course I had to buy them, because I love animals, Reader.
I couldn’t find the chocolate ones, but I was okay settling for the Golden Oreos.  I was curious to see just exactly what a Mega Stuf looked like, and if it was going to explode out of the package when I pulled the tab back.
It didn’t, and they do look more stuffed, but really just sort of messy, with the stuf squished out on the sides to give the impression of a “we’re-so-stuf’d-we-can’t-stay-within-the-cookie-parameters.” 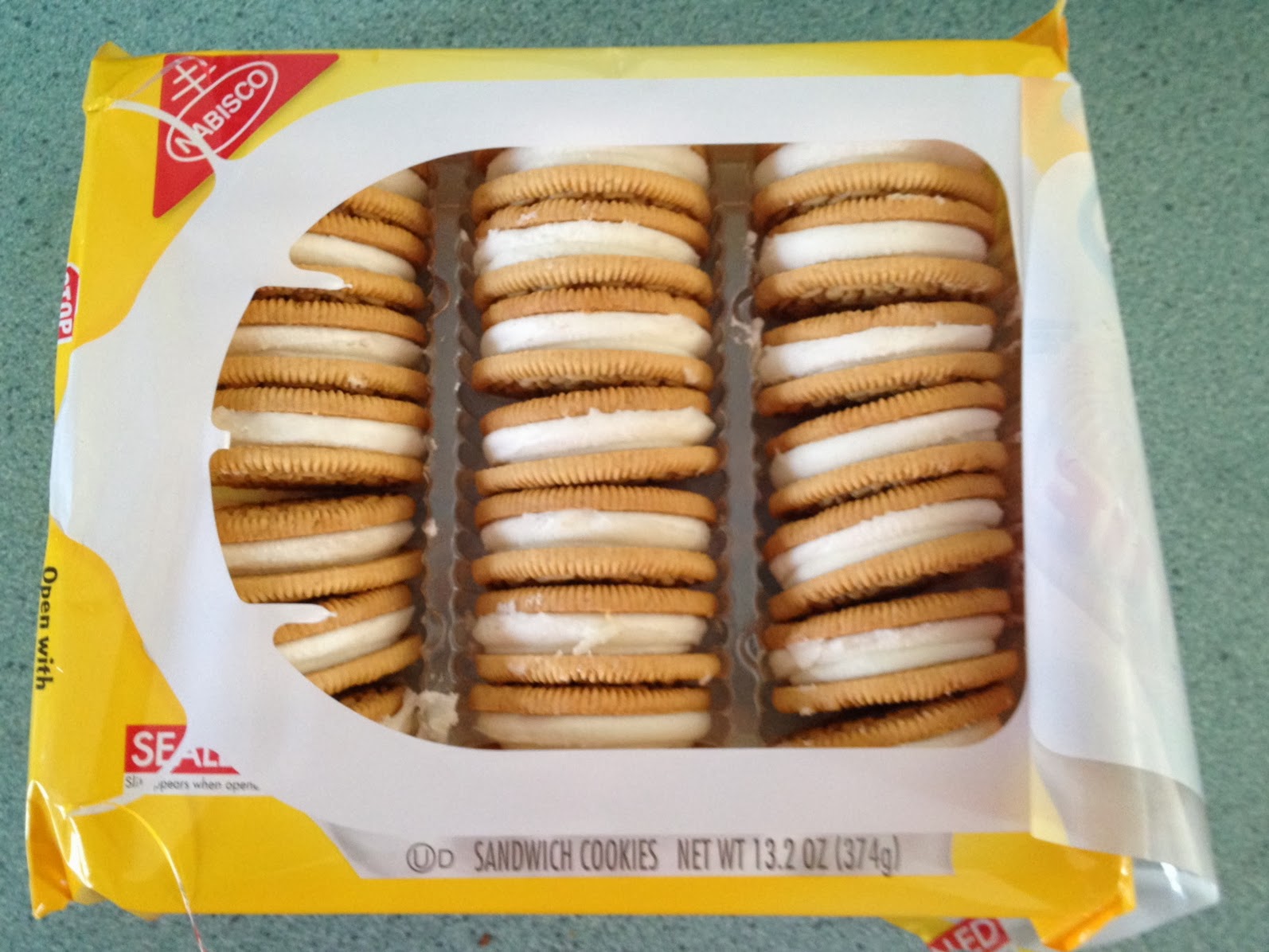 Back in the olden days, when double stufs first made an appearance, they were very tidily stuffed and did not look like they were exploding out onto the cookie.
I know this because I had them for dinner many-a-night, because I was twenty and calories didn’t count because you danced and/or fucked them off every night.
Calories count now.
My Mister proclaimed these too sweet, and while I managed to have four with my coffee for breakfast, it wasn’t like the best tasting thing ever. I mean, it was still an Oreo and all that, sort of, but I’m not sure if it was the golden style that I didn’t love, or the mega stuf-fedness, or a combination of both, but I was all “Eh, I can dunk ’em or leave ’em” and will probably leave ’em.  At least I hope so, or I’m really going to have to start dancing…..and stuf…like I did in my twenties, and frankly, I”m not sure I have the gumption for that much devotion to … dancing.  We’ll leave it at that. You’re welcome.
Neither Nabisco nor the ASPCA are paying me for these posts about America’s Most Animal-Friendly Cookie, however, they should be, so if they’d like to send me some cookies – or animals – I would probably take them.
I wouldn’t mind having a cow or a goat in the backyard. I would name it Oreo, of course. Or Mega Stuf. On second thought, please don’t send me a cow or a goat, Nabisco or the ASPCA.  I wouldn’t be able to decide on a name.