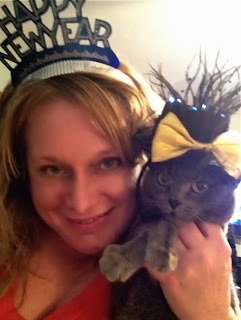 It was a Cats in New Year’s Hats Extravaganza at Chez Bang Bang.

Right about now they’re wishing we would go away and celebrate New Years at some other locale.

I’m happy to usher out 2013. It wasn’t a bad year, but it was a stressful year. I know that stress is a natural part of life, but it was just too much of it. That whole house buying thing dragged out for a good portion of the year and it was not exactly an easy time.  Moving is hard.

But that’s all behind us now, and it’s onward & upward. 2014 will be the year we get organized.

We still can’t park in the garage and have shit just shoveled into the would-be office.

Should we take down the Christmas decorations in the morning??

It seems so sudden, yet I sure would like to have it all tidied back up.