The Bang Bang Theories
Let's Be Friendies
The Friday before Christmas I was sent to Tiny Town’s fulfillment center to sort and pack jewelry. Because my job is just chock full of opportunities like that, and now I can add that to my resume, although I’m not sure exactly what “that” is.
I do know one thing. I suck at “that.” I’m not very quick at all with packing jewelry up to send to customers. And I felt like an asshole because while I was doing it the thought, “this if fucking up my fresh manicure” ran right through my mind. It was a hoity thought, considering this is those folks everyday job.
I’m willing to step up and help however is needed. But I was a little bit concerned about being sent to the FC – which is a hour and a half from home – on the Friday before Christmas weekend with snowstorm warnings being broadcast.
I knew going down there it wasn’t going to end well. I almost – ALMOST – packed a bag. But then remained optomistic that all would end well.
It didn’t, for a number of reasons. First, the huge shipment of jewelry I was sent down to help assort & pack? Didn’t show up, because it was coming from Chicago and was waylaid by a day due to the snowstorm that hit them right before it made it’s way to us. So while I did some minor shit on the floor while we waited for final word about the shipment, I didn’t do what I had gone down there to do.
And by the time we got the final word that the shipment wouldn’t make it until Saturday? It was rush hour and blizzardy.
Twenty minutes into my ride home I pulled into a gas station and asked The Car and The Phone to find the nearest hotel. My Mister was relieved, he was worried even though I had his sturdy SUV.
Several hotels came up, which were 8 miles away, and I wasn’t sure I could make it 8 miles. The closest thing to my gas station location was The Rocking Horse Inn. I hesitated, but then called.
No one answered.
I tried three more times and no one answered, so finally I did as “Bob” encouraged and left a message.
I went to the dollar store to get a toothbrush and a magazine and a bottle of wine. And Doritos. That’s my go-to comfort snack. That cheesy goodness comforts me.
As I was looking for toothbrushes, Bob returned my call. He had a room available, told me he had a “hospitality pack” so I didn’t need to buy anything if I didn’t want to, and gave me some directions. He told me he’d leave the porch light on.
I was hesitant, but resigned. I could have been walking right into a creepy horror-story scenario. But after my SUV slid through two stop signs I had no choice.
I slid down the street and the car told me I had arrived at my destination. Except I couldn’t quite believe my eyes, because my destination appeared to be a huge Victorian house all twinklie with Christmas lights and decorations. And I didn’t know where to park.
I called Bob back. He came out on the porch and waved me over, yes, it was the right house, pull down the side street and park next to his cars.
Bob asked a lot of questions, what I was doing in town, etc., why I needed a last-minute room with no luggage (he hadn’t been watching the news), but must have deemed me “legit” pretty quickly because when he told me he only accepted cash or check, I had a crestfallen look on my face and he said, “Well, you can mail a check to me once you get back home.”
My faith in humanity was restored just a little. And by some dumb luck, I had my checkbook in my purse – which I never, ever carry – except for last week. So I was able to promptly pay.
I was his only houseguest for the evening.
Bob toured me around the house and told me the history of the home, and invited me to make myself at home with anything that wasn’t locked up. He pointed out the Keurig,assorted snacks, homemade pumpkin bread, a fridge full of wine and beer, a hot tub on the back porch that I was welcome to use – swimsuit optional (he had a couple suits there to use if needed, or he told me to just tell him I’m in it and he wouldn’t come back there) – showed me the library with books,  a master bath with a jacuzzi tub that I was welcomed to indulge in, and finally led me to my dollhouse of a room. It had a private bath, so no need to fret that I had to use a communal bathroom for pooping. That was always my fear with a B&B. 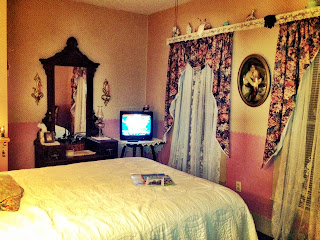 Dinner consisted of a salami sandwich, hardboiled egg, Doritos and wine. Dinner isn’t normally included in the B&B experience but he was more than generous. It was delicious. 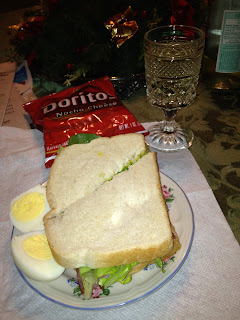 While I was milling about the house, a young and snow-covered couple slid up the front porch and asked if there was any availability.
Bob and I thought they looked a little sketchy and they left once we informed him we only accepted cash or check. Bob didn’t offer to let them mail it in. Once they left, Bob told me he thought they looked like college-kid partiers, and they smelled like cigarettes, so he wasn’t too thrilled to accommodate them.
However, they went into town and got cash. Told us (see how it’s quickly become mine & Bob’s house??) how their tires were just too bad to make it about 10 minutes up the road to home. We let them stay in our house, and I thought this was part of our Christmas good-will towards man. They didn’t get the grand tour of the house, but were quiet enough and didn’t disturb me while I was taking a jacuzzi soak, reading magazines and drinking beers.
I curled up into my fresh, clean sheets, all soft and warm from wine and jacuzzi and slept contentedly and happily as the snow flurried outside.
In the morning Bob had prepared an egg & ham souffle, had a place setting for me ready with a bowl of fresh berries and the morning newspaper. 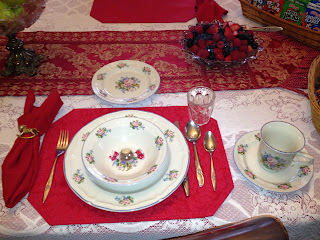 The house looked a little less welcoming in the harsh morning light, but imagine this twinkling with lights at night. I had never stayed at a B&B before, but have to admit I think I enjoyed it because it was unexpected and I had a much-needed recharge. 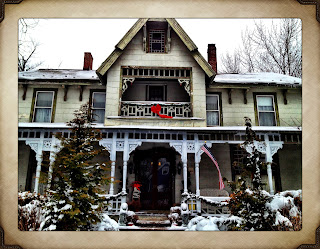 It was the best bad-luck ending of my entire year, finding The Rocking Horse Inn during a snowstorm. And all was right with the world.