Against the probably better judgement of my brain, and thumbing my nose at the messages from The Universe, I went back to the Cleveland APL and found this little fella: 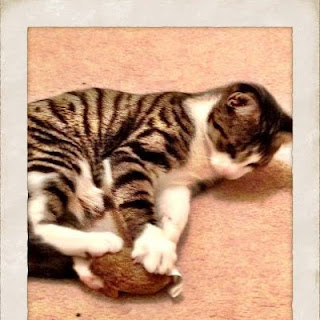 And scooped him up, paid my ten dollars and forty cents for him (he was on sale this month, sponsored by the radio station Q104), and marched his little ass home.
My brain said, “NO! You don’t need another cat! Your attempts have been thwarted for a reason!”
But? The heart wants what the heart wants.
Mine wanted a little boy to play with Toby and liven up the place.
He “given” name is Carl. We were kinda sticking on calling him Buddy, but I’m not sure if that’ll last.
He’s rompy and busy and a sideways walker – like, he just has so much energy his backend gets away from him and catches up with the front, and pretty soon he’s walking sideways.
I’d like to name him Katniss Everdeen, but that’s a girls name.  Maybe I’ll name him Kathiss. Because some of my less-than-accepting girl cats have given him a lot of hiss.
He really doesn’t let it phase him. He’s made himself right at home. Climbed up in bed and made a little nest between Kenny’s legs. Got up from there and burrowed down under the covers next to me. Purr-Purr-Purred so loud. He’s a talker, too. Very chatty. Very cutie.
I didn’t need another cat. But the heart wants what the heart wants.