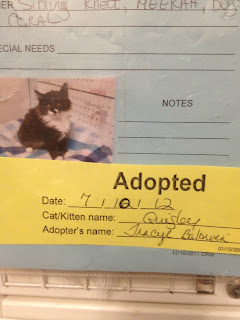 Ever since the loss of Twinkle Toes, I’ve had a Twinkle-sized hole in my heart and Toby has had the loss of his little cat friend who played with him. So I’ve been looking around a little for a few weeks now, stopping in at the pet shelter and checking out online pet shelter selections to see who grabs my attention.
Finally, last night’s stop at the shelter yielded this little fella above and I decided to bring him home.
Except I couldn’t, because the shelter closes at 7:00 p.m. and it was ten to seven.
So I filled out the paperwork and they yellow-flagged him as “adopted” and I said I’d be in either Wednesday or Thursday evening to pick him up, depending upon how my Wednesday schedule played out.
So.  It’s now Wednesday. And I left work at five on the nose so I could beat traffic and make it to the shelter in plenty of time to complete the deal.
Except I hit the Van Wyck. As soon as  I tried to get on the entrance ramp. And long story short, it took me an hour to get back to my side of town.
And then I had to go find a bank-in-the-box. Because they only accept cash ($85, high-priced pussy cats there) or check. So I drove to the bank-in-the-box and made a withdrawl.
And then I drove to the shelter. Which is near my house, only about 5 blocks away. Close. A 3-minute drive. Which they could see from my application, my street which is so fucking close to the shelter, I could drive home safely with the cat on my head, if needed.
And then? They told me I couldn’t take the cat without a carrier. Which I have at home, but in the interest of time I figured I’d forego.
Which I obviously couldn’t.
So I drove home. Down my under-construction-bumpy-as-a-motherfucker street.
And ran to the basement and got out one of the cat carriers. And then drove back to the shelter.
And then the adoption counselor called me into a room and they informed me that they didn’t think we’d be a suitable home for the cat.
Because of my two *ahem* other cats that I have listed on the paperwork, a 3 yr. old and a 9 yr. old.
They were concerned and think they’d like him to be in a house with other kittens only, or in a house with no other cats at all. So he doesn’t have to “compete” for his position in the household.
And then? I almost lost my shit because, SERIOUSLY? MOTHERFUCKERS? YOU DON’T THINK I’M A SUITABLE CRAZY CAT LADY WHO KNOWS ALL ABOUT INTEGRATING A CAT?? And then I realized that my anger issues would only make them feel justified, complete with a lot of lip-pursing and head nodding towards each other, so I pulled it together and instead I *somewhat* politely replied, through a tight-lipped semi-smile, “Well, you have to do what you feel is best.  There are hundreds of cats out there waiting to be adopted. I’m sure I can find one at the APL, instead of giving your shelter my $85. And I will never set foot in here again.”
And then I ha-rumphed out of there, slamming the door with my cat carrier. And then I muttered something along the lines like, “you could have told me this shit last night, or before I drove home and got the cat carrier, and saved us both some time and trouble.”
And then I got in my car and cried because I felt like a giant motherfucking loser who isn’t suitable to care for a pussycat and what the fuck do they even know about me and who the fuck are they to judge me and that cat just lost the best motherfucking cat mama a cat could have and that shelter just lost my business and I’m going to bad mouth them on the Interwebs as soon as I get home.
Which is what I’m doing now. Suck it Parma Animal Shelter.  And I don’t want to read one word about the overpopulation at the animal shelters. Here’s an idea: Adopt out your cats. If you are wondering if a family will take good care of the animal, why don’t you try calling their vet for a reference instead of making your unfounded judgements on your own.
Although that could work against me as I scaled down the actual number of cats in the house, and they would have refused adoption based on the Liar Liar Pants On Fire clause in the adoption contract.
So we remain status quo in the cat department. Which is still a lot of motherfucking cats.