The Bang Bang Theories
Let's Be Friendies
And Meatless August comes to an end.
September was ushered in with a 12 oz. ribeye. 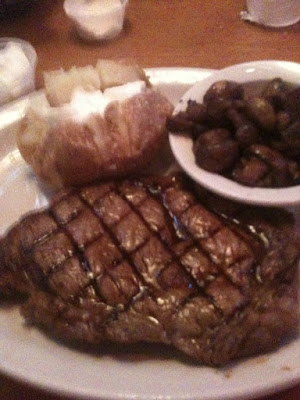 I had worried/thought/considered the possibility that I may not enjoy a piece of animal flesh once my mouth grew unaccustomed to it, but lo, that was not the case. I enjoyed it just fine. My Mister did, too.
We had a very successful August with going meatless. We struggled to figure some of it out, one can only have potato & cheese pierogies so often, but we sort of found a groove. It wasn’t entirely difficult.
However, this past week I found myself substituting ice cream in place of a substantial dinner meal. Last night I had a “dinner” of 2 slices of whole wheat toast with sliced tomatoes on it. Then, a few hours later, I wanted an ice cream cone so we went out at 9:45 p.m. for ice cream. That happened three times from Sunday to Wednesday. Ice cream cannot be dinner. Or can it?? I’m still not sure, perhaps that’s the next experiment.
My Mister & I had planned to go meatless straight through to our October vacation, but then tonight? At dinner time? We said, “Fuck it, let’s get a steak.” And that’s what we did.
He lost about 7 lbs., I lost about 5 lbs., and this is even WITH the ice-cream dinner menu. So it did us some good, and gave our systems a rest, and our pooping habits changed (not that they needed to, but we noted some differences in how our bodies were processing food), and I even started exercising this past week. I had more energy – finally.
Good things.
We’re going to get back on the meatless wagon, right after Labor Day weekend. And then we will sail through on that plan until we sail away on our cruise ship in October.
We’re Flexitarians.