The Bang Bang Theories
Let's Be Friendies
Remember way back when, around February/March and I was so excited to report that I had bought myself a farmer this year (joined a CSA)? Well, we have had a number (well, only 2, but 2 is a number) of disappointments and it’s only June!
Kenny was all of the har–har–har, what-a-waste-of-money, this-is-probably-a-scam mindset.
Now, it’s not that bad, but he’s getting a pretty good chuckle at my expense (literally, $350 of expense) so far.
First of all, my CSA (Consumer Supported Agriculture) didn’t begin when we believed it would. We thought we started getting some early produce in May. When we (The Healthy Hoff and myself) sent an email to Farmer Chuck at the end of April letting him know we’d be at the Farmer’s Market, we were informed WE didn’t start getting stuff until June. So that is going to take us until the end of October, as we were promised 22 weeks worth of food, which is fine, it was just a little setback.
This past Saturday, June 4th, was our first pick-up of our bushels of delicious, organic healthfulness. The Hoff and Mr. Hoff went and picked it up.
Here was my portion: 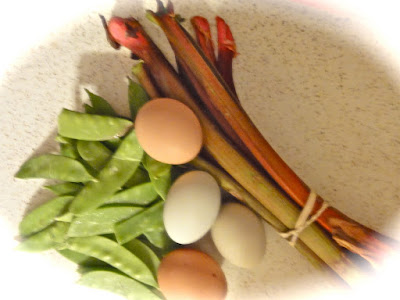 Yep. My entire portion (minus 2 eggs, I ate those for breakfast before I took the picture). Rhubarb, snow peas and eggs. We paid extra for a weekly dozen of eggs.

The Hoff’s loot included about six small potatoes (just enough to make a side dish for 2) and a couple of radishes, and one more small thing (lettuce, maybe), and six eggs.
I plan to make a rhubarb-strawberry pie with the rhubarb. Call me Betty Crocker.
I am sure that by July I will be posting picture after picture of abundant goodness. We’re just off to a slow start. Right?!?
Upon meeting our organic farmer Chuck, The Hoff reported back that dude has had a psychedelic youth. Not all cylinders were firing. Ironic, since he doesn’t believe in using any chemicals on his food.