I’ve got very little to offer you this week, Reader. I do have a ton of product reviews, but wanted to give them more than a cursory nod one way or the other, but that may be what we’re left with tonight. It IS Superbowl Sunday, the game IS on, and I’m SORTOF watching it. I’m keeping an eye on the score because I’ve got some Benjamins riding on the digits (ahem. who AM i?? all street-sounding). I thought I had some good numbers – 7 & 7, but it wasn’t to be.

We’ve got a pork roast in the oven. A garlic & parmesan flavored one, which I have to ask, did we steal this? Because it was $3.89 per pound, and it’s a 5+ pounder, and had a close-to-$21 tag on it. But the dude who rang it up, rang it up for $3.89. He even commented, “You’re getting a heck of a deal on this, it must be on sale or something.” And I nodded and said, “I guess so.” Is it my responsibility to insist they charge me more?? I thought to myself, “WWSD?” (What Would Sophie Do?) and I could feel her orgasming in her cremains at the thought of a 5lb pork roast for $4.
We’ll probably get worms or something from it, a reward from the PorkKarma Gods for screwing The Man. Even though I did nothing to contribute to his screwing, other than paying the price they told me to pay.
I got screwed later that afternoon when I paid $62 for insulin for Twinkle Toes. Now that’s just ridiculous. I wish I had the balls to put that on my health club account, I really don’t see why I can’t pay for all his people-medicine through it, but I somehow think the Gov’mnt would screw me back. And believe me, I get screwed enough. Which leads me to the perfect segway of More Conversations With Kenny:
Scene: Saturday afternoon, in the kitchen, standing at the sink washing dishes.
Kenny, grinding up behind me with the hard-to-resist proposal, “Hey, how about a little kitchen rape?”
I know, you’re jealous, right? Because this is the Sexy that goes on around my place.
I didn’t fall for the kitchen rape proposition, but I let him play Inappropriate Teacher and Awkward Schoolboy later that evening.
Ah, didn’t ya miss this stuff?? I bet you’re wishing things woulda remained crickets from me.
Anyhoo.
In deference to my latest Lesbian-But-Not-Really-Because-I’m-Not-A-Lesbian crush (not that there’s be anything wrong with that), I two-tone died my hair a little. I made my bangs darker, and then a little on the sides, too. It turned out quite dark: 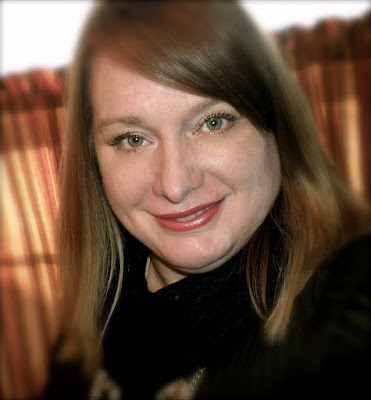 It doesn’t look this dark in person.
Kenny told me I photograph Asian. My eyes get more slanty in photos, and now, coupled with the photographs-dark hair: Asian. Pair it with pasty-white skin and I’m downright Geisha-like.
So enough of that.
In response to my post about the Soft Hands Challenge, Meggan gifted me with some Kiehl’s hand cream. I am definitely softer, I think. I’ve been diligently slathering myself with greases and potions and layers of stuff, but I’m still not Ridiculously Soft like my friend The Hoff. And on the sides of my hands, near my thumbs, the skin looks a little bit like chicken skin. I don’t know. Maybe it’s just the look of 44-year-old hands. But I can tell a difference in my cuticles, they aren’t as raggedy as they normally are, so the greasing is paying off somewhere.
In other news.
The diet of 2011? So far, I believe I’ve gained like 3 lbs. in January. Suck.
It’s not like I wonder why. I know why. Oh yes, I sure do. It’s been a month of cake since the New Year started. I haven’t said N. O. to any of it. We’ll try for a better day tomorrow. Again, poor Tomorrow. All the shitty stuff lands on Tomorrow’s shoulders.
I’ve tried the Zumba tape. Finally. It’s pretty stinkin‘ fun, actually, although I am absolutely uncoordinated. I just sort of hop all around, waving my arms over my head, hoping to catch a beat now and again. Twenty minutes will work up a forehead froth, to be sure. But I’ve only done it twice last week, because I’ve gone to bed too late and then can’t get up early in the morning and in the evening I’m too tired and well, it’s just a vicious cycle.
I’m going to save my other product review/news for another post. I’ve been trying things, Reader. Good things! Exciting things! Things that involve my nailbeds. Patience. Good things come to those who wait. Someone said that once. I don’t think it’s going to be true in this case, however.
**p.s.** I know it’s not politically correct to joke about rape – kitchen or otherwise – but I don’t really give a shit about being politically anything. And it’s probably a faux pas to even say “slanty eyes” so this is just insulting all over the place. In the words of J. Peterman, “Here’s to a job, done.”