The Bang Bang Theories
Let's Be Friendies
Where to start with this story? Hm…. lemme get my cuppa coffee. It’s a most spectacular flavor sold at Nervous Dog, which roasts the most seriously delicious fucking coffee. Ever. A coworker gifted me with my very own bag for my very own birthday. Yeah, the birthday where I just turned forty fucking four. The coffee makes it a little easier to swallow.
I don’t want to be a big birthday crybaby. As my dad says, ‘It shore beats the alternative.” But seriously, fuck. I woke up from a sound sleep to greet my 44th birthday and had to hobble out of bed due to lower back stiffness. FOR NO GOOD REASON. NOT EVEN A BAD REASON. NO REASON AT ALL. My back just said, “Well, here ya go, Fucker, enjoy getting old. er.” So whatever. I’m going to focus my 44th year on getting more bendy, and have been looking to dig out my pilates workout tapes. Starting tomorrow, things are going to change! Haha, poor Tomorrow. Tomorrow always has sucky shit to look forward to.
However! I did get my very own cake! Kenny bought this for me while we were at the Food Show, made in all it’s frosting-ed glory at a local bakery and it did not disappoint. 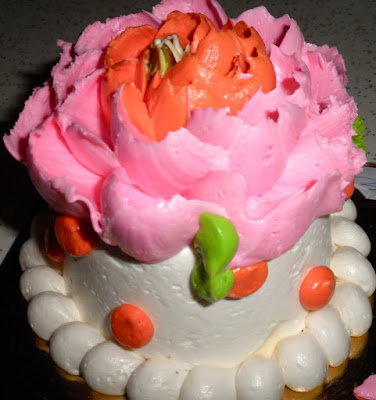 It was teensy, just a single-serving size. Well, single-serving size for those of us who never met a piece of cake we didn’t like. I didn’t share. I’m not a good cake-sharer. Maybe I’ll try and be better at that, too. While I’m stretching. Tomorrow.
We flew to St. Louis to celebrate the birthday. The birthday was just a convenient excuse, really. The casino’d been hounding us to come on down, so we finally agreed to let them fly us out there as long as they gave us food comps and a suite. They did. We had a really great room. I don’t know why we’re so important down there, I had $550 to take with me. Not like we’re big spenders. Well, me, I’m not. Kenny had a date with doom on those machines this weekend and we don’t want to talk about it. On the other hand, I won $2000! 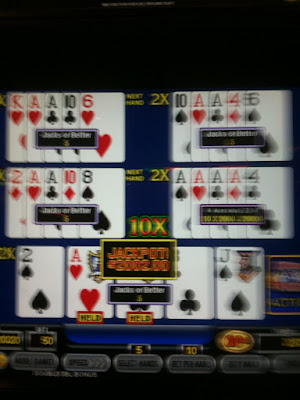 But after I gave Kenny 30% (our split rule), paid taxes, tipped the person who paid me (common courtesy), and blew $500 in some other random machines, I came home $50 ahead. Sort of a sad ending on a $2000 win. Ah well. I still enjoyed the thrill of momentary victory.
Now we’re home. We were only gone 2 nights.
The best part of the trip, outside of winning the jackpot? The shower in our suite. Kenny woke me up on Saturday morning and told me I had to get up and try the shower immediately. It had the most powerful sprayer. EV. ER. It had a rainforest sprayer that drenched you from the ceiling, and then the jet in the normal position, and then a jet for your feet or something – and it was so forceful, it cleaned every inch, inside and out.
It waterboarded me.
I was begging for mercy. I let it pound some of the stiffness out of my lower back. It not only cleansed, it exfoliated, too. Seriously, it was crazy-powerful. We took a lot of showers ’cause it was such an adventure. We had some crazy sexy times in it, too, and I thought we were going to drown from the mishmash of water sprays going every which way. We didn’t.
Sorry, now once again that’s something you can’t unknow.
Our plane ride home was super early, we had to be in the lobby at 6:30 for our limo ride. It was really bling–ie and had lights that pulsated with different colors and reflected off the crystal decanters. I kept expecting Hugh Hefner to pop outta somewhere in his bathrobe and cavorting to ensue. 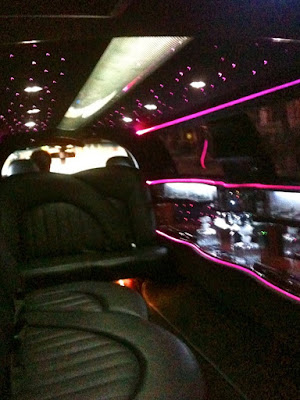 It was a little much for that early on a Sunday morning, The Lord’s Day.
Luckily, we enjoyed a lot of crying babies on our early morning flight. The casino flew us out on Southwest. Not my first choice, but whatever. We thought we were picking good seats, towards the back, figuring all the babies would be up front.
Didn’t quite work out.
We had a squaller in the row across from us, and up one. I realized that not only am I now in middle-age, but I’m also a really big asshole, because I glared at the parents and silently cursed them for being all righteous and not believing in using Children’s Tylenol or Benedryl for quieting purposes. It would have been in the baby’s best interest, I swear. They were bouncing the baby around and whatnot, and at times I couldn’t tell if it (not trying to be even more of an asshole by calling it an “it”, but it had an indiscernible gender) was screaming in delight or distress. Either way, it sucked.
Kenny said the baby kept staring at him for the duration of the trip. I told him he should have given the baby the finger. He laughed at the thought of it, but then told me that I really was a baby-hating asshole, or something along those lines.
It was a short flight so I’ll shut up about it now.
But one last trip note. On the way to pick up our car in longterm parking, we got on the elevator and Kenny saw another couple and rushed me with a, “Hurry up!!” as he didn’t want to hold the elevator for them. They weren’t even the couple with the baby, they weren’t even on our flight. It was quite out of character for Kenny to be an asshole. We (er, me) weren’t fast enough and the people got in with us and I told them, “You know, he told me to hurry up so we wouldn’t have to ride with you, I don’t know what his problem is.” And Kenny’s mouth dropped open before he could recover himself, and then he started laughing and told them that I was just an asshole liar, and well, it was pretty funny (to me anyway) and I’m not sure they believed him, but they laughed anyway. I’m pretty sure Kenny wanted to punch me in the nuts, but I got a good laugh out of it, and that’s what’s important, right? Right?
I farted as I got in the car. Kenny, still recovering from my comment to the strangers, shook his head and wondered, “Couldn’t you have done that BEFORE you got in the car??!” “I could have, but I wanted you to enjoy it, too.”
I’m all kinds of a lady.