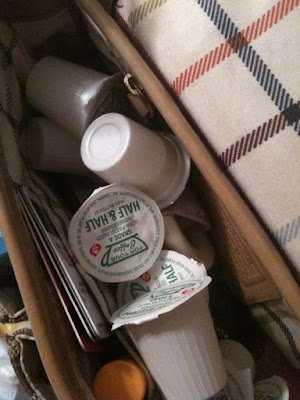 “I’m becoming my grandmother,” she muttered to herself as she found herself stuffing single-serve restaurant half & half’s into her purse.

She rationalized her actions, telling herself it was just this once, because she had used up the last of the coffee creamer on Saturday, and couldn’t face the crowds of Sunday Afternoon Shoppers at the grocery store.
But the packets of unused honey from Popeye’s chicken stuffed in a kitchen drawer tell a truth she cannot avoid: this is becoming a habit, and not a solitary action built out of necessity.