The Bang Bang Theories
Let's Be Friendies
Sometimes the Universe aligns to tell you not to do stuff. For instance, today I’m being thwarted in every attempt I’ve made to online shop. Yes, Universe, I hear you! I don’t know if it’s a message that’s trying to protect me from spending or procrastinating. Maybe both. I have a multitude of tasks on my list for today and sitting around adding things oh-so-easily to my shopping bags certainly wouldn’t be contributing to the greater good of any of them.
Here are some of the items that I’ve postponed:
1/ Writing a speech for Nerd Club, aka Toastmasters. I’m supposed to deliver the goods on Tuesday. My speech topic ideas so far involves advice on how to “stop being so busy/how to get organized.” I haven’t written that yet. Maybe I can throw in some pointers about how to stop procrastinating as long as I’m going to be all “Pot, Meet Kettle.”
2/Loads and loads of laundry. Well, probably five loads. Not millions. Five loads including blankets and stuff that I’d like to get freshened up. Maybe six loads. It’s not the washing/drying of the laundry that’s the killer for me, it’s the putting it all away. I hate hate hate it, primarily because it’s such a jockey for space in our two-bedroom-too-tight closets. So often it will sit in folded piles on a table in the basement. Today (I vow, haha) to bring it all up and find a spot for it. Right after I write a speech. Toby’s ready to help with filling any empty laundry baskets. 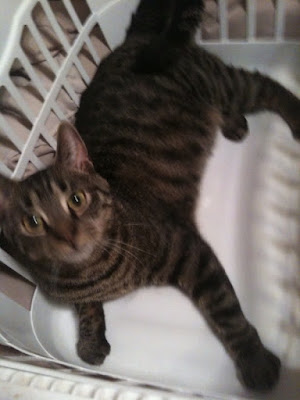 3/Put my shit away that’s piling up in the living room and kitchen. Reader, while I often lay the blame at Kenny’s feet for all the clutter, when I really look around I see that much of the shit is my shit. I’m to blame! Partially to blame. Equally to blame. There is some sort of blame. I’ll include some pictures, you’ll see for yourself my Shame. In fact, I did acknowledge to Kenny that if he piled his shoes up the way I do in the bedroom I’d be in his ass so deep I’d never get the smell of shit off my feet. But it’s me, so I like to rationalize, justify and redirect the blame.
Exhibit 1: The Shoe Line-up. 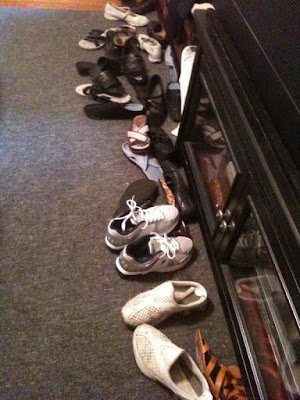 We live in a small place. It’s doesn’t get any easier to find a home for anything when we have oversized televisions taking up much-needed space instead of, oh a DRESSER for all of our clothing. But we do have this in the 9×10 (I just made that up, it feels about right) bedroom: 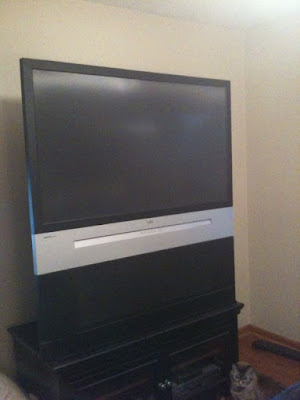 HGTV WOULD NOT approve.
Notice how little room there is to the ceiling?? I have included this picture for two reasons. 1/so you can understand part of my challenges and 2/ to give you an opportunity to window-snoop a little bit. I for one love to get a glimpse behind people’s curtains, and back in the olden times this Peeping Tom could get satisfied by driving down the street at night when folks had their lights on and curtains opened. You could get a little glimpse. Then I’d make up scenarios about what was going on behind closed doors.
So here go you, my curtains are opened for a brief hot second. Peep away. Notice the furry cat on the floor. Also,there’s a brown thing in the background on the wooden part of the floor, that’s a window draft-dodger thingie that just sort of landed there recently. It’s a little sparse looking other than that. We have not created an Oasis For Love with this room. I painted it, a boring beige. There is nothing on the walls. Not that we could actually decorate over the television or anything. I’m looking for a solution to use that little corner of space between TV & Wall, something to help out our storage needs. Maybe I’ll get to that one day.