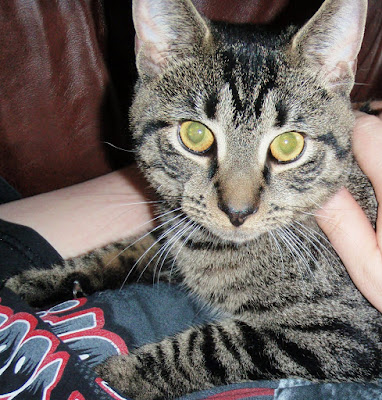 Meet Toby. Despite everyone’s opinion (including my own, depending upon the day) that we should wait before getting more cats, Sunday Kenny and I decided to go to the pet shelter and check out a couple of kittens that were at work for a photo shoot last week. We had planned on a little black cat (Widda Redux) and his sister, a little tabby.

But once we got there and looked around, we were charmed by this older cat who kept reaching out of the cage to get our attention. He’s only 9 months, but he looked HUGE in the cage, compared to the babies. He is a dollbaby and has fit right in with the house and is making friends with the others. The only downside is that he needs to be declawed. He’s pretty gentle and hasn’t flayed us open yet, but he has the potential to do so. Toby doesn’t know what’s in store for him this week.

It was really cute and I knew there was a playful baby in the house when I went into the bathroom and saw toilet paper strewn all over the room! He’s frankly adorable and playful and purry and sweet.

Now, as Paul Harvey used to say: The Rest Of The Story.

We also bought another full-grown cat. She’s the true underdog. She was on clearance, anything to get rid of her, she’s been at the shelter since April 1st and sometimes has a little bit of a bad attitude. Of course Kenny couldn’t just let her sit there. She’s quite beautiful, orange with yellow eyes, fat and sassy. She’s hanging out by herself in the spare bedroom, not settling in the way Toby has, but we’re giving her some space. She’s been behind bars for 5 months, we’re cutting her some slack. I went to get a photo of her, but of course my camera’s acting up – something about dirt on the memory card. I tried to clean it, but wasn’t successful. So photos to come later.

Save your Crazy Cat Lady speeches. We like to have a full house and know we made a difference in something living’s life.