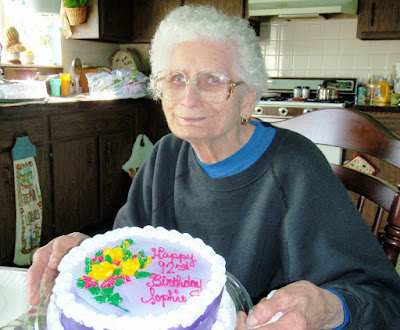 Here we are, finding ourselves celebrating another Mother’s Day. And again, Sophie celebrates another birthday – 92! Melinda, my nephews and I went out to her house on Sunday for the festivus, bringing food and cake over to her house since she’s not going out on account of the Swine Flu – it’s not gonna get her, No Sirree. You may think I’m making that up, but that’s really the excuse she gave me for not wanting to go out and celebrate with Kenny’s family. And she’s serious about it. Oh, well, when you’re 92 you can have your own rules.

She’s lookin‘ pretty darn good for 92. Melinda and I can only hope to hold up that well. I’m doing what I can, and have had some success battling back against The Wrinkle, by the way. It’s a lot less evident and severe. Take THAT, Wrinkle! I’ve been implementing my 3-prong attack, without the green tea, but using not just one, but three wrinkle greases on it at night. And I’ve been re-educating The Wrinkle with Frownies in place, much to Kenny’s nighttime delight. I’m a sexy little number at night with these little papers stuck all over my face. 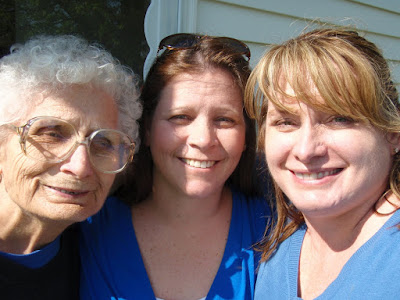 Here’s Sophie looking innocent. I told her to strike a “holy” pose so she did: 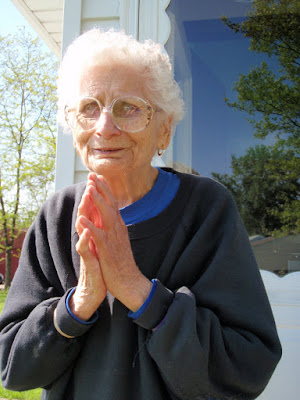 We stayed a few hours, enjoying ribs and chicken from Famous Dave’s and chocolate birthday cake. It was nice to see my nephews, I don’t see them very often. Trevor is pretty sensitive to all conversations which include any mention of below-the-belt activities and left the room a time or two. I asked if they “Twittered” and they said no, and I merely mentioned that I’ve twatted before. Trevor left the room. Then Melinda proceeded to tell us about having two kids the natural way, passing right out of the vagina (no C-sections) and that did Trevor in. Me, too, by the way. And now I’m guessing you, too, Reader. Again, you’re welcome. Oh, yes, we do have these conversations right in the room with Sophie. I told her to say dicks and tits while I was taking her picture. I grew up in a rough household, you wonder why I am the way I am?? Now you know.

Here’s a picture of Melinda & Clan’s dog. He’s cute and well-behaved. And he’s not neutered, as I noted when I saw him walking around with gigantic dog-balls swaying away. Melinda doesn’t seem to think that’s a pet necessity. Ah, country living. That’s all I can say. How I escaped it is still a mystery. 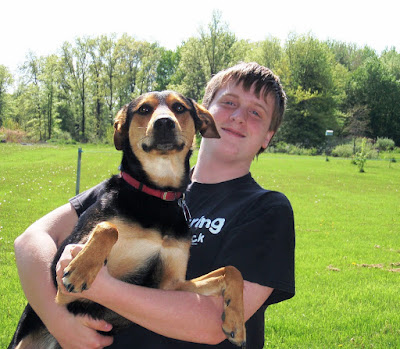 Sophie did make one pretty good Sophie-ism. She mentioned the neighbor’s dog got hit & killed by a car, and it was “better that the driver just killed the dog, because the vet bills would be what it would cost to care for a person.” She is nothing if not practical.

Saturday we spent the day with Kenny’s side of the family, treating them to a Mother’s Day dinner at Buca de Beppo, our two-year-running tradition. We really have a good time there. Here’s Margie & Linda striking a pose: 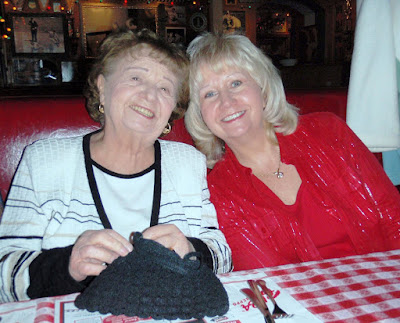 And Margie with Stanley. How lucky, they’ve been together and married over 65 years. What a nice way to roll through life, with the one you love beside you. 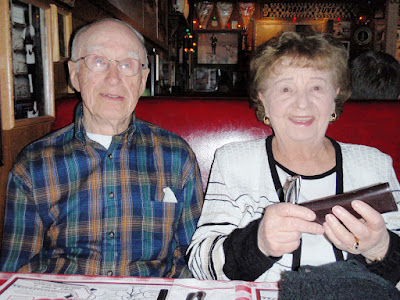