It was an obligatory weekend, which is never ideal, but sometimes it just is. Oh, be forewarned, this post will have pictures of cats. So you know.

Saturday morning I got up really fucking early for a Saturday morning. Timmy and Lisa heard me rummaging around and looked at each other perplexed, wondering if there had been a three-hour time change they didn’t know about. No. I was just up early, getting ready for the big finale for Toastmasters. Had to drive down to Canton by 9 a.m., ready to give my criticis…er…helpful evaluation. I had to go first. Drat. To make a long story short, I was DQ’d. Went over time. But. The fucking people running the lights didn’t have it quite figured out for the first speaker (me!) and so it threw my whole game off. Oh, well. I was mad and annoyed and sad and disgruntled. I don’t mind losing (well, maybe I do), but at least if I had sucked and didn’t win, I could accept that. But to get up, get dressed, drive an hour away, and do a good job and get DQ’d really blows. So I am full of sour grapes. Kenny and I have both deduced that I am in fact a sore loser. So that’s the culumination of the evaluation contests. And I really think I would have had 2nd place (out of 4 of us). Some fucker has my trophy now.

I pouted a good part of Saturday, and then we went out that evening for cocktails with The Gang at Cleats. Pete was trying to ply me with tequila for some reason, but I was a cautious drinker. I’ve already been the victim of tequila and black cowgirl hats. I don’t need a repeat performance of that experience.

I’d like to have something more exciting to say about Sunday, but I spent the entire day scrubbing this house down from top to bottom. Well, that was the plan anyway – I didn’t make it much past the bedroom. I decided to do it right and clean the closet as well, no sense spring cleaning half way. That took For. Ev. Er. And the HAIR in that bedroom – I think I scraped up a sixth cat for us.

Now, in the past I have been mocked by many for being Exact Change Girl. Yes, I’m the person at the register who scrounges in her wallet to make exact change. It annoys many, mostly men, for whatever reason. But here is why I do it. For the simple fact that I don’t have this much change in my possession: 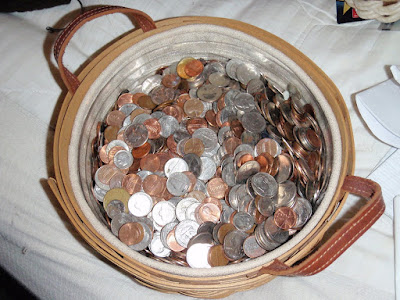 Now, that picture does not do the amount of change justice. It’s A LOT. It’s practically filling a Longaberger Bread Basket. And it’s the bane of part of my bedroom problems. Kenny rarely makes exact change, so every time he spends money, he’s handed back a handful of coin. Which goes in his pants pocket, and then gets emptied out all over the top of the bedroom dresser, the coffee table, or even better, the bedroom floor. I walk around picking up quarters, dimes, pennies, nickles each and every day. Sophie would have a field day. Me, not so much. I’m just annoyed by it. Think I’m kidding? Here’s the dresser, after I’ve cleaned off all Mr. Anderson’s other papers and whatnot, and the change – and dust – left behind: 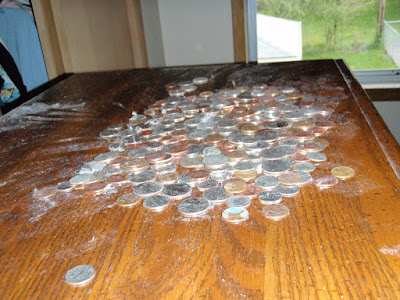 So I cleaned all that up, reallocated the other three change baskets he had into the one large basket, put a small basket for all his other paper and bullshit he pulls out of his pockets, and have put down a mandate that once the big basket is filled with change he needs to do something with it to pare it down or I’ll just take it to Coinstar and keep it. I didn’t actually tell him that part, but that’s what’ll happen.


That room is pristine now and it smells like fresh air. Now comes some of the cat pictures I warned you about. Twinkle had The Best Day helping me clean the room. Then, once it was scrubbed from top to bottom, and clean bedding was in place, he was exhausted. 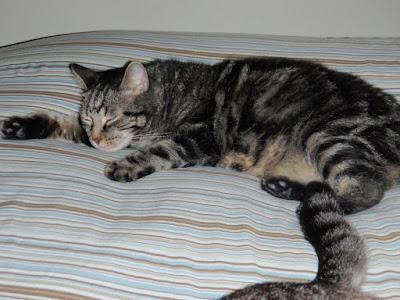 Stanley’s laying with him. 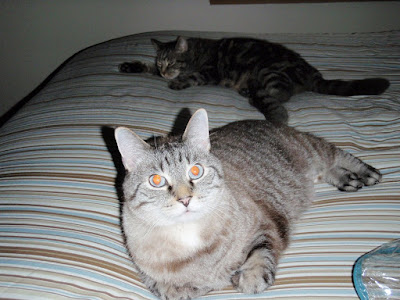 In my household, we’re a little weird with how much we weigh the cats – but I like to keep a tab on it because weightloss is actually first indicator that something is awry. Which is exactly what happened with Caesar. I’ve noticed his fur has looked a little baggy lately and really started to monitor his weight. He lost an incredible amount in a short amount of time – down from 20 lbs. to 14.6. Thursday night we took him up to the vet to see wassup with dat. He’s also been doing a weird head jerking thing, too, so I shared that with the vet. Concensus seems to be that he’s got a tooth ache – which would hinder his eating, cause the weight loss, and account for the jerky head thing. So here he is resting tonight, with his little tooth ache. 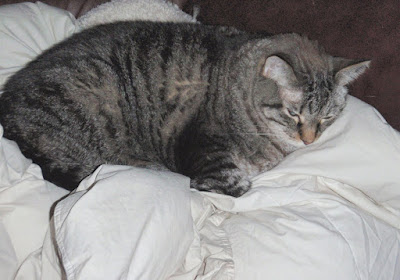 He goes in Monday morning for cat tooth surgery. They’ll put him under and figure out which tooth is the source of the angst and do an extraction. Caesar hates me more than he normally does (he’s a 1-man cat and really has no use for me) since I’m the one who’s been giving him his dreaded antibiotics. He disregards the fact that I’ve been giving him cat food broths and whathaveyou. I’m the enemy.

Oh, it didn’t help matters that when I went to load him up Thursday night to take him to the vet I didn’t have the cat carrier door secured properly and his floinking around inside caused it to come loose and he toppled out of the cage and landed on his face in the stairway. At that moment I realized I’d be a horrible mother and it’s a good thing my loins did not bear fruit. Or children. Fruit might actually be kinda cool.