Rob gave me a hopefully lucky $10 to spend gambling. I took it to Vegas last month, but didn’t spend it as our luck was SO BAD (audience shouts: “How bad was it??” It was SO BAD, it made Lupe stealing our dry rub our best luck of the trip!”), I held off on spending it.
The Murdoch Ten went to New Orleans. Luck was bad, per the usual standards of 2008. I held off spending it until 2009, but I still didn’t see a really good machine to play. I ended up putting it in my favorite slot machine, even though it hadn’t been particularly lucky. I hoped that streak was about to change with the coupling of the Fonz and the Murdoch. 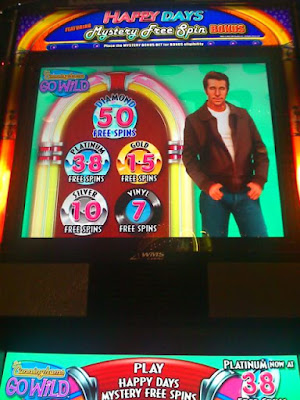 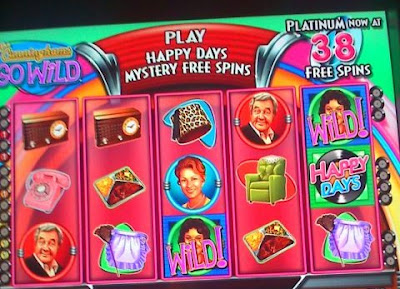 For Chrissake, doesn’t that JUST SCREAM FUN??!! Fonz is there at the top, hitting the juke box and grunting out “Aayyy” at random, increasing the “spin multipliers” all the while One, Two, Three O’Clock, Four O’Clock Rock belts from the speakers. Then the game plays, where the Cunninghams GO WILD!!

The game played up and down, eventually ending on down with the Murdoch Ten. It also ended on down with the Baldwin Five-Hundred (yes, that’s a conservative estimate of what I pumped into that crazy machine over the course of the trip). It was too much fun to resist. I heart Fonzie, even though he betrayed my dedication.