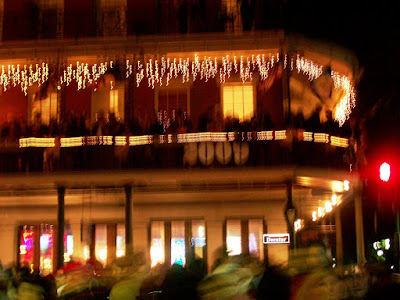 Happy New Year, 2009!
Kenny and I celebrated the turn of a new year in The Big Easy. It was a trip filled with lots of great food, cold drinks, interesting sites and smooth jazz – everything you’d expect from New Orleans, in fact. Below are some random pictures, much better than a lengthy blog about it all.

We stayed at Harrah’s hotel, which is across the street from the casino and close by the Riverwalk, a nice path along the river that’ll take you right down to the heart of the party zone. Dotted along the Riverwalk are places to stop and buy cold beers or mixed drinks. They make it very convenient to drink in this city. 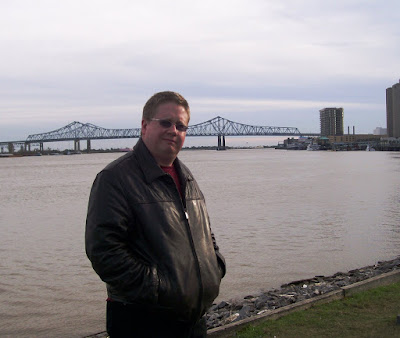 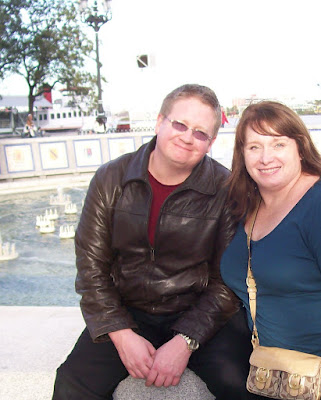 Twinkle was of course all packed up and ready to go with us. I love his little cat face!! 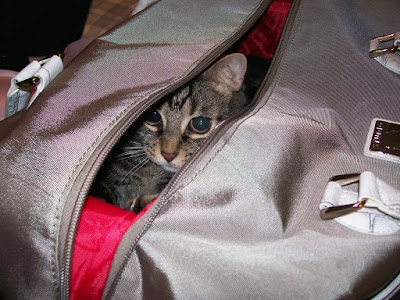 The notable part of this picture is the suitcase itself. Since the airlines have imposed those checked bag fees, I’ve made it my mission to not pay them. I purchased this carry-on for our last trip, and managed to pack four days worth of clothes and beauty necessities into it, despite the limitations with toothpaste and hairspray. We made due. I’ve even succumbed to using hotel hair products, which are really not so bad anyway – especially for just a few days. So I – who normally takes two huge suitcases for all trips – have learned to pack light! I even had stuff in here that I didn’t wear. Kenny wants me to challenge myself to use just this bag for a cruise. Now that probably can’t happen, as they don’t provide any bathroom products outside of soap.

On Friday we took a guided city tour that made a stop at one of the cemeteries. It started to drizzle and while everyone was poking around in a grave where some bones and teeth had risen to the top, I blurted out, “Look! A rainbow!!” The tour guide was happy that I was paying attention to him. 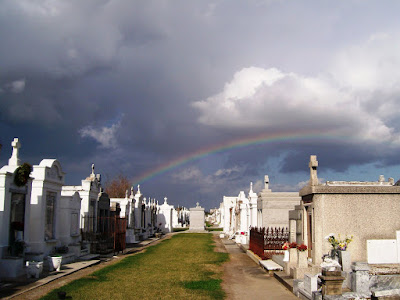 The tour guide was very accommodating despite my incessant questions about the filming of Benjamin Button. He made it a point to drive us by the house that was used in the movie to appease my curiosity. Or end my questions…

We also toured the Lower 9th Ward, the area most affected by Katrina, and saw firsthand the lack of progress being made towards the rebuild. We did see the five houses that Brad Pitt has had built. He had planned on building a couple hundred, but there’s a whole bunch of politics going on and he’s only been able to complete the five so far. It’s a shame. We toured Musician Row, which is an area that Harry Connick Jr. is rebuilding. Seeing the devastation, and hearing a first-hand account from someone who lives there (our tour guide) makes it clear how our country can be in the in the financial disaster it’s in – FEMA has paid out billions, and there’s not much to show for it.

Harrah’s hotel is only a couple of years old, and was quite fancy. We’ve stayed in really nice rooms before, but this one had a few features that I found to be blog-worthy. Most importantly, the bedding was encased in fresh sheets, top and bottom. No common bedding was touching my person – that skeeves me out after working in the hotel industry. I can’t even sit around in the chairs in hotel rooms, I have to touch fresh changed bedding only. Our room had double beds, and you know you’ve been in a relationship for a while when you’re excited to see that! We were both happy to be able to sprawl out. Kenny likes to fuck in my bed, and then move on over to his own bed after he’s messed mine up. I seem to not make out in that deal as much. 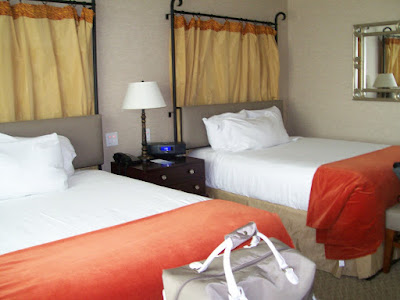 The hotel has replaced old-fashioned “Do Not Disturb” signs with these fancy electronic devices. You set it from inside your room, and a keypad on the outside lights up accordingly. There is even a doorbell on the outside keypad, which I rang enough that the people in the room next door came out to see what the hell was going on. I was quite fascinated, and apparently the bells are a little louder than I realized. 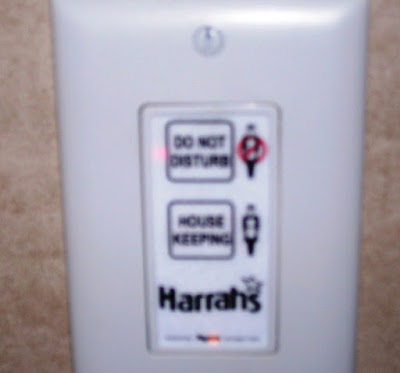 The floor tiles even had nice attention to detail, with inlaid glass joining the tiles. Very pretty and uncommon in a hotel room floor. 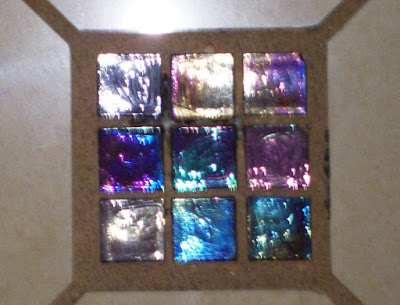 The hotel was across the street from the casino, not directly connected. They had built an underground tunnel connecting the two, which Kenny was dying to explore. He was quite fascinated; I, less so. He went over to get us Starbucks one morn and took the tunnel, and came back to our room disheartened. I asked what it was like and he dejectedly replied, “Just a walkway.” I asked, “Well, what were you expecting?” “I don’t know, maybe some caves and neat stuff.” You’d think that perhaps the builders who put such thought into the hotel rooms could have stuck some caves and mystery down there in the tunnel.

The hotel had a display outside, Miracle on Something Something (I wasn’t paying close attention, apparently). It was set up to “snow” every hour on the hour, and I wanted to see it. Kenny was a little surprised to hear this request, as we’d just left a real snowstorm at home and I wasn’t eager to stand out in the middle of that. Why would fake snow be of interest? I rethought that idea and we left. He did manage to see it himself on his way back from spelunking in the tunnel. 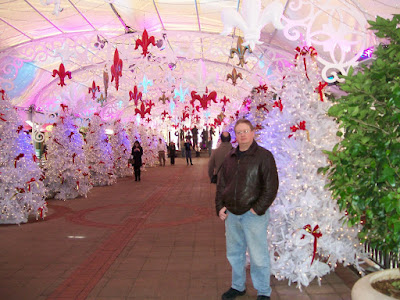 It wouldn’t be a trip to New Orleans without a drunken crawl on Bourbon Street. We walked there from The Riverwalk, where we partook in the offering of the beer and mixed-drink stands. By the time we made it to Bourbon Street Kenny had consumed four beers and I had heartburn from a lemmixy Hurricane. I think I’m 20 years too old for New Orleans. Anyway, we made the stops along the way, buying 3-for-1 beers and seeing the sights. 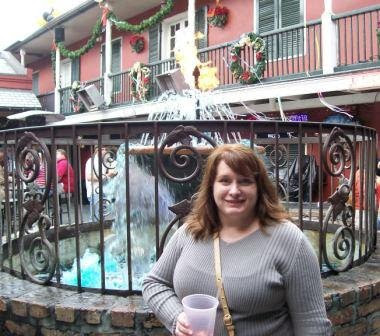 By 2:00ish, Kenny was well on his way to being a hotmess, and I insisted we go find food. He was grudgingly accommodating. We put our names in with the host, who mistakenly heard our name as “Pin” rather than Ken. So we were “Pin, Party of Two” that day. That might be my new fake name. Pin. Huh. So Pin sat down and we ordered fried alligator, which was delish, Pin got a blue-cheese burger (he was a little tired of spicey by now), and I had a shrimp po boy. One beer and a coke later, and our bill was $64 for that little bit of grub. Prices were a little steep most places, but we did eat at a really cheap and fabulous place the first day, Cafe Mesparo or something like that. Our bill there was only $27 and included beers, appetizers and huge platters of food. It also came with a lengthy wait to get in there. 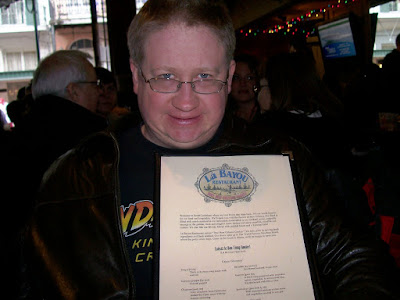 With a belly full of food, Pin came down off of his buzz and was ready to walk back to our hotel. So much for our crazy wild life on Bourbon Street!

New Year’s Eve was a mash of people crowding and pushing and shoving. We’re not really sure why this rates as a Place To Be, but it does and we were there. 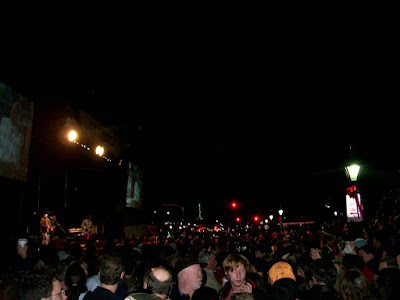 We came home Saturday. Sunday morning I awoke to find Widda had hocked up a giant hairball right next to my face on the pillow. Welcome, 2009.