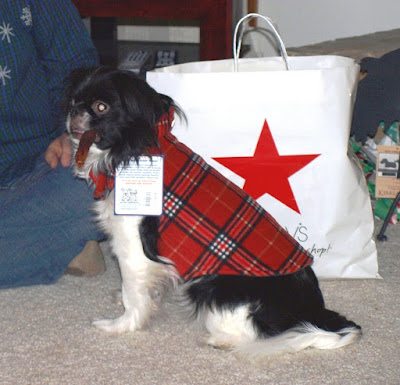 While it was a merry Christmas for the Anderson-Baldwin (me) clan, I did a poor job capturing the moments on film. Or on digital, whatever, that just sounds dumb. I’m sure you’re secretly relieved. Or maybe not so secretly!
It was the usual quiet but nice affair. I visited Sophie on Christmas Eve, and then Ken and I went to his grandmothers for Christmas dinner and the opening of gifts. Linda and Margie took it easier this year so we only got three big bags of stuff – they have a tough time dialing it down. But they did get us some really nice stuff, and their thoughtfulness is always appreciated. Mickey (Linda’s baby boy) received his “smoking jacket” from me & Kenny. Really just me, I’ve told him that next year if he continues his lack of participation in the thought process and payment process, just my name is going on the gifts. We’ll see how that works out.
Kenny’s belated gift was finally ready today so I went and picked it up. It was a magazine cover with Indy on it, one I had picked up while we were on one of our trips to Vegas this past year, I had it framed. It looks incredibly awesome. They did the cover and two pages of the inside story. I thought it would look nice in his office…when he gets a new office, that is. Even he acknowledged I “probably won’t allow it up in the house.” I’m a bitch. If we had a dedicated office space, or a game room or something I would. But it can’t go just anywhere, I do have rules (never mind the fact it’s his house).


I seriously have zilch to say. I think it’s a first. I’m procrastinating working. I’ve procrastinated it all weekend. I’ve done about an hour on it so far today, will dedicate another hour to it before leaving it for tomorrow, where I can be in a giant rushed panic. That’s the way I roll, regrettably. Maybe I’ll change that for next year. I’m working on my Affirmations for 2009 list. They’re going to be more specific for the coming year, perhaps with deadlines for accomplishment. I seem to work better with deadlines.

We received two free cruise offers in the mail on Saturday. I’ve had a very hard decision to decide which offer to take. One leaves out of San Jan and goes to the Southern Caribbean. It includes my 12-year-old-dream-destination of Barbados, with St. Lucia thrown in for good measure (along with islands we’ve already visited included St. Thomas & St. Maartin). The other offer cruises the Mexican Riviera and leaves out of Los Angeles and includes Cabo, Puerta Vallarta and some other Mexican hotspots. Kenny leans towards the Los Angeles trip, he hates San Juan, but that has BARBADOS. I am having a hard time saying “no” to Barbados. I’ve put way too much thought into it this weekend. Timmy reminded us that the other option is to say no to both of them and stay our asses home for a change, seeing as we have Alaska on the horizon. That’s always an option, I guess, but certainly doesn’t sound nearly as much fun. Just in case we do decide to go, I hightailed my ass back to the gym this morning, for the first time in months. It was frightening, but I amazed myself by lasting 30 minutes/3 miles on the elliptical. I figured five minutes and I’d be nearly passed out. The body’s more resilient that I thought, seeing as I’ve had rivers of eggnog coursing though my veins for the past two weeks.

Linda got everyone these blankets for Christmas. They snap and zip and do all sorts of things. Kenny said that blankets with sleeves have already been invented, they’re called robes. Stanley looks like St. Francis. 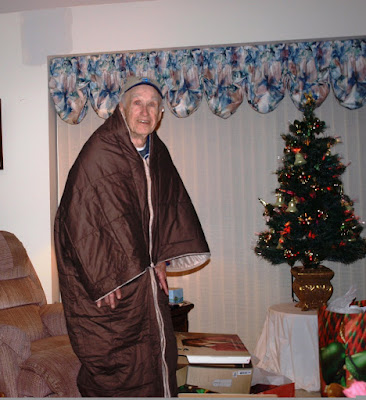 The end. I have to go do more work.