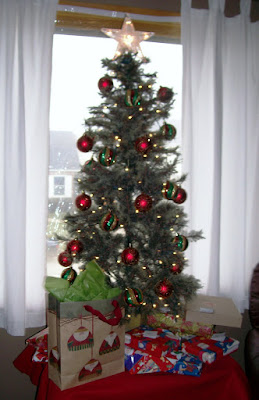 Presents were wrapped and placed ‘neath the tree, cookies were baked and visits are underway. It’s Christmas!
Neither Kenny nor I were able to get each other what we wanted to this year, so since it’s the thought that counts we just told each other what we were going to get – it was much cheaper that way! I was going to get him (and me) T-Mobile GPhones, but in addition to the steep price tags ($179 discounted price each), we would have had to pay an additional $50/month for Internet service. The phones don’t work without the Internet service. That’s on top of the service plan, and I just couldn’t do it. That amounts to the price of a week-long cruise, just to surf the ‘net on my phone, which I would never do. But the gift was a nice thought.
Kenny thought of getting me the diamond bezel for Rolex. I am excited to make her sparkle and bling even more. I have the diamonds in the numbers, but not around the face. I figured I would add that on later. Well, he tried to buy that piece for me (expensive, too – $800 and up depending on the amount of carats), but the snooty folks at Rolex informed him that my $7500 watch is actual a slumwatch in the world of Rolex – they don’t make the bezel to go on it. It will fit, that’s not the problem, but they are only “authorized” to go on the solid gold watches, which I of course do not own. That’s crazy-expensive. So if he were to buy one anyway and have it installed elsewhere, it voids the warranty. Always some way to get ya. So he told me and got a kiss for the nice thought.
Our real gifts to each other were a CD (Britney for me) and a DVD (Batman for him). We each have one thing on order for each other that hasn’t arrived yet. He ordered a watch winder online (it will keep my Rolex wound when I’m not wearing it) for me and his gift is still a surprise so I can’t mention it here yet. It’s good though. Kind of good. Thoughtful. Still being crafted, I waited too long to order it so they told me it wouldn’t be here until a week or two after Christmas. Maybe next year I’ll act sooner!
Sophie has once again decided not to go out for Christmas this year. She’s not sick or anything, but told me last night she’s just “tired of livin‘”. I guess I can understand that to some degree. Ninety-one years and you just might get sick of participating. But as there’s not one thing wrong with her, looks like she’s stuck living a while longer. I’m sure Christmas is pretty sucky for her anyway, seeing as my mom died the day after. It’s always a struggle to put on a holly-jolly disposition and I’m sure she’s just sick of trying. So she can stay home, I brought her blueberry jelly that she asked for and took her a hambone, you would have thought I handed her the Christmas star with that little bag of goodness.
Last night I wrapped Twinkle up in my new super-soft pink bathrobe (I had bought it as a gift for someone and decided to keep it) and reenacted the nativity scene with him swaddled up as Baby Jesus. If the rest of my life hasn’t doomed me to hell, I’m sure that did. Happy Birthday, Jesus. 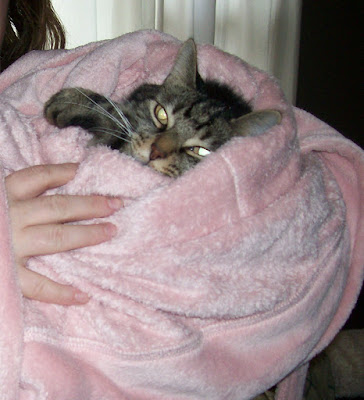