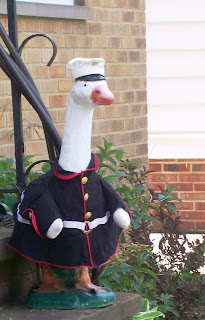 Goose honored Memorial Day by donning it’s Marine Corp dress blues outfit. I was looking for the Uncle Sam red, white & blue outfit I have, but it wasn’t readily available so we figured this one would fill the bill. Coupled with a little flag in the front yard, it was looking downright patriotic.

The weekend was jam-packed with fun, with festivities bulging at the seams. One more Thing To Do, and the weekend would have burst. Saturday I kicked my own ass at the gym, deciding to “run” a 10k on the Elliptical Machine. Just like that, decided to go for it. My heart could have burst, for Chrisssake, but I did it and it didn’t. Sixty five minutes I was in motion. I felt victorious, as if they were handing me a trophy or something. They didn’t. A new contest is starting at the gym this week and I need to get signed up for that on Wednesday. I’m going to implement a 5k three times a week and run the 10k on Saturday’s when I can. I figure at that pace I’ll have the best ass this side of Brookpark Road –that’ll be some achievement!

Margie celebrated a birthday on Sunday, that’s 88 years for her now. I asked her if she had any regrets with her life, anything she wishes she would have done and didn’t and she couldn’t think of a thing. She said her life was spent doing and going and hanging with friends all the time, they would have dances and play games and bowl and it was just the best life. Doesn’t get much better than that, no “wish I would of’s“. I wouldn’t be able to say the same yet, I have too many things still to do on my While I’m Still 98.6 Degrees list. 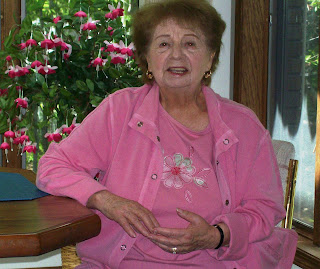 In the spirit of the holiday weekend, I made a red, white & blue trifle for Marge’s birthday treat: 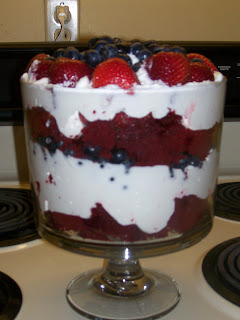 Stanley and I threw back some giant Bush beers: 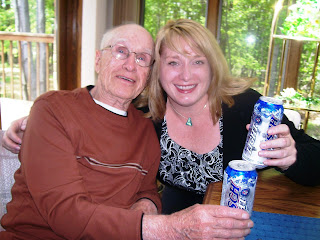 After the birthday visit with Marge & Company, Kenny and I headed to a cookout at Pete & Vera’s. They know how to throw a party. I can say it is the first time in my life that I’ve been to a cookout that included New York Strip Steaks and King Crab Legs. Who even does that?? Pete & Vera do, that’s who! I heavily indulged in the new Bud Lime beers that are out, and I must say they rival Landshark for me. Pete & Kenny decided to make out: 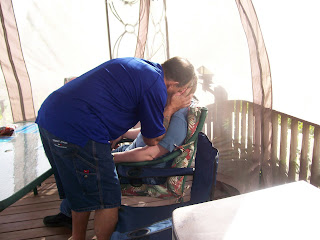 I was happy to have Pete “service” him for a change, he wore me out over the weekend and I was sick of kissing him by Sunday 🙂 Pete is walking around sans neckbrace. These are two sexy muthafukers. Hand’s off, Ladies – they’re spoken for! 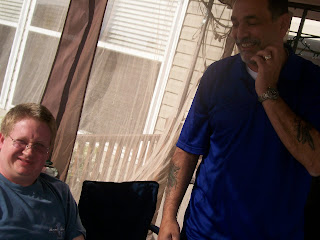 While the boys were making out, Vera was grillin‘ steaks: 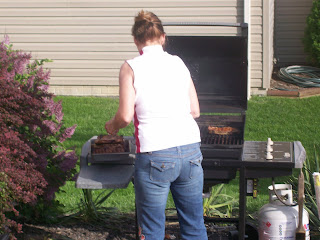 Their backyard is really pretty, a nice deck, a stone patio, a little pond. All that’s missing is me on a chaise lounge with a good book. Kenny and I had a fight on Monday, I was pretty bitchy with him because I know he won’t be digging me a pond in this lifetime. He’s not into digging. So I created a fight about it, and told him I was going to go find a new Landscaper Boyfriend. The funny thing is, we don’t even have a backyard appropriate for a pond, yet there I was fighting about it. Sometimes when you want to argue, you can find a fight in anything.

I was in a pretty pissy mood by Monday afternoon, I had been to the cemetery to put flowers on my mother’s grave and then went and spent some time with my grandmother Sophie. She frustrates the fuck out of me sometimes. I’m still actually a little irritated with her even today, Kenny advised me to go to bed early and “reset.” She didn’t do anything in particular, just her bullshit worry about money and not eating right (because the cost of food is too high) has me extremely agitated with her. I told her to keep it up, by Christmas we’ll have her in a nursing home. She hates that threat. Well, I know she’s too old to change, so it’s just a matter of dealing with it. I do need a reset.

Here’s a random picture of the MaleMan, he stopped over on his Harley. I gave some of Fucksteve’s shit from his old Harley to him, he was able to do something with the seats and tailpipes and other random shit that was left in the gargage when I moved. See, it’s all recycling. Fucksteve’s shit has been recycled down a variety of avenues 🙂 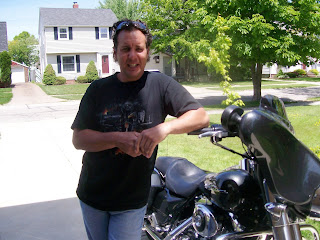 My order of Frownies came in today, I’m sitting around the living room with sticky squares stuck to my face. They suggest “for best results” to sleep in these crazy things, but really how is that even possible?? They’re sticky little squares stuck to my face, with the promise of wrinkle elimination. Even if they weren’t irritating, what would these things to to my sex life?? Frownies = No Fuckies. I’d post a picture of the ridiculousness, but my computer picks and chooses when it will or won’t read my photo memory card. It’s chosen not to read it at the moment.

Note to self: When I’m at Wal*Mart and looking at random cat toys and ask Kenny, “Would the cats like this?” DO NOT LISTEN if Kenny says, “Sure, get it.” I didn’t do that, and now have this monstrosity sitting in the dining room area, and the last time Twink was in it was when I threw him into it a couple of weeks ago. Now I have this stupid-ass looking thing sitting in the room, unattended to and neglected. I can’t even return it, it came in a billion pieces and I threw the box and receipt out. Next stop: Treelawn. 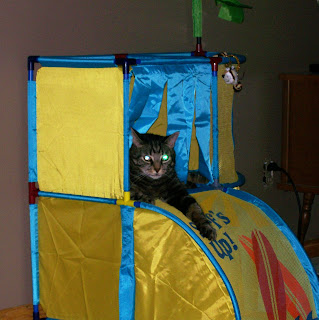 That’s just about all I’ve got this week. Well, there was so much more, but really I do need to seriously reset myself so I’m heading off to bed. Oh, yeah – I would be remiss if I failed to mention that we did see the new Indy movie Monday night. Maybe that’s why I’m sluggish, we went to the 8:45 p.m. movie and I had to work today, maybe I just need more rest. That marks the THIRD time Kenny’s seen it since it opened. And I doubt that he’s done yet…..

Peace, and make the most of your week. Eighty-eight years go by in a flash, I’m told.