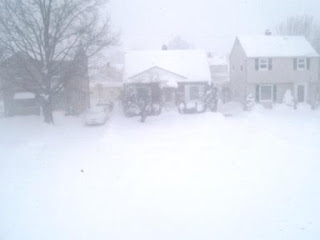 Might as well make the most of it. I had been mentioning having a “Naked Saturday” event at the house, where we just lay around naked all day and watch television, and whatnot. Once the perfect opportunity was presented for just such a day, I determined that was more crazy talk and instead practiced my cake decorating homework. Good thing, too, because I was a disaster at it. I didn’t have my icing recipe handy – it’s in my car and there was no way I was venturing outside – so I was going from memory and totally forgot to add one of the ingredients. Long story short, the cake turned out really good – lemon with raspberry filling – and I got some frosting practice in, but it certainly wasn’t the best batch for decorating. I think I got carpel tunnel from squeezing that pastry bag. My frosting may have been a little on the thick side.

With the major snowstorm rolling in on Friday, we were let go from work early Friday afternoon. Kenny and I spent that “bonus time” shopping Friday afternoon for some “snowed-in” groceries and we’re fully stocked up with yummy goodness for a change. We had a very fun day snowed in. I had a full day of nesting, making some really great french toast for breakfast, using King’s Hawaiian Bread, which was just so good. I also whipped up a pan of homemade lasagna with garlic bread for dinner. Days like today I really miss having a dishwasher! I believe we’re going to rework the kitchen next year, I’m going to look into new cabinetry from Kraftmaid and see what we can figure out. Kenny told me he had a dream that he came home and I had knocked out the wall between the kitchen and living room. Who knows :0) – he might come home to that one day!

We spent the better part of Saturday watching movies, refreshing my memory on Raiders of the Lost Ark in anticipation of the new release in May. Tim and his girlfriend decided to drive to Atlantic City on Thursday so we’re on dog-duty, which Kenny has taken over for the day. I haven’t had to tramp around outside at all. I did tramp around a little bit inside the house, though. Even though it wasn’t a full-out Naked Saturday, there was no sense in wasting a perfectly good house-bound day without a little bit of raunchy nakedness.

Thursday night Meggan and I had our first sewing session. I’m shaping up to be the next Martha Stewart at this rate. I ended up purchasing all my sewing supplies at good ol‘ Wal*Mart. Meggan and I are the only students, so we got some one-on-one attention. I find it hard to believe that I’ll actually have a tote bag created after next Thursday, but time will tell. I don’t think I’ll become some great sewer, whipping up cute little jackets and such, it took us two hours just to cut out our patterns. In fact, we didn’t even get all the cutting done in a two hour time span, we both have to finish that up as our sewing homework.

Sunday Update: Well, I ventured outside today and spent two hours shoveling my car out of the driveway. We did enough on Saturday for Kenny to be able to get out for work on Sunday (he had to work at Cinemark, not his normally scheduled day) so I headed outside around 11 a.m. and started shoveling. Two hours and one blister later I was second-guessing our decision to do it all in one fell swoop rather than throughout the day on Saturday. I had to shovel my car off – I hope hope hope we’re parking in a garage next winter! Our driveway is really long, much longer than a driveway with an attached garage, so it just seemed like the shoveling would never end. And there was really no place to put the snow since the houses are so close together – you have to carry the shovels to the back of the house at some points in the driveway. I’m impressed my 41 year old heart held up.

Anyway, by 1:00 p.m. I was back in the house and absolutely unable to warm up. I had to take a shower and was promptly besieged with another bout of whatever cold I’ve been fighting off for the last week. I have officially relapsed and haven’t moved from the couch all afternoon, other than to drink some Theraflu. I haven’t even made my cake decorating homework for tomorrow, I’m too run down to even consider baking. I’m rather disappointed that I’m going to be a cake-decorating dropout so soon, I just got my tackle box of stuff assembled on Saturday. Well, sometimes that’s just the way it is. I’m grossed out just thinking about a batch of Crisco-laden frosting right now. I’ll call them tomorrow and let them know I’m under the weather, and try to pick back up on it the following week. Good thing the class was only $21.

Kenny just got back from taking my car to the gas station to fuel ‘er up for me, he’s good that way. I was too cold on Friday to stop, and I was nearly on “walk.” Not enough in there to make it to work in the morning. I sure hope I’m feeling better by morning, I have to go to work, there’s an Executive preview for Valentine’s Day and I don’t have my notes done yet. My info wasn’t supposed to be presented, then Friday afternoon it was decided to present. Then we were told to go home because of the weather, so I’m really under the gun Monday morning to whip something up. Ah, good times.

I have some fun pictures from sewing class, but I’m too under the weather to download. I’ll save that for next week – I know, you’re waiting with baited breath for that. I had planned to finish writing my speech for Toastmasters, but it’s all I can do to finish this nonsense up today.

Oh, one last note: Kenny found out his old acapella group have officially disbanded. I’m so happy that they imploded on themselves! Guess there were massive creative differences of who was going to be in charge, etc. Plus, Kenny used to pay for everything and haul around all the equipment. Guess they didn’t realize how much he actually did for them. Life’s sometimes like that. You don’t know how good you had it til you fuck it all up for yourself. Well, I think Kenny got some satisfaction out of hearing they broke up. Sometime’s you can get some satisfaction out of someone else’s misfortune. Right or wrong, that’s just the way it is.

Peace, dose up on Vitamin C – it’s tough to keep the germs at bay.