It’s official. Some days I would rather lay around in my own squalor rather than clean the house. But look at how cute my laying-around-pals are. It was a 3-cat pile up! 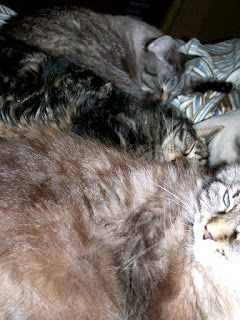 We decided to take a Saturday afternoon catnap rather than scrub the toilet, vacuum or mop. A decision we may regret at a later date, but fully enjoyed today.

It was a really fast work-week. Busy, busy. Only made it to the gym one night, but I guess that’s better than none. Although that is now officially two Resolutions which have been breached. I think I need to revisit those, I’m not having much success so far and it’s only 11 days into the year. Or 12 days, can’t keep ’em straight, even with my new Palm Pilot TX. That’s a whole ‘nother story, which includes tears and a scrunched-up frowny face. I seem to have it stuck on one Excel sheet, can’t figure out how to get to my other documents, reminders for tasks don’t “pop up” and remind me (not even sure if they’re supposed to, or if I’m just supposed to check ’em daily), and I don’t know how to download files I’ve created on my laptop into the Palm. Well, one thing at a time, I guess. I did get some CDs ripped for my MP3 player, but that’s about all the progress with technology that I have made recently. Sad, really. During the crying spell, I told Kenny I was taking it all back and buying a good old-fashioned spiral bound notebook and a new ink pen. I miss the good ol‘ days, simpler times. 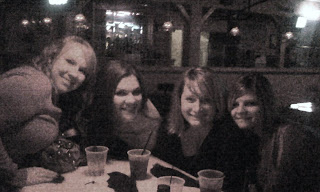 Speaking of simpler times, Friday night the girls from Product Management and myself had a good old-fashioned night out at Saddleridge, learning to line dance and two-step. As corny and ridiculous as it sounds, it was really a LOT of fun, I tried a few different dance steps and it wasn’t nearly as difficult as I had feared. Kenny stopped up to make sure I didn’t need a designated driver (nights with those girls can sometimes creep up and break bad on me!), but he wasn’t interested in two-steppin‘ and boot-scooted on outta there when he saw all was fine.

Stefanie and I stayed the latest, and perhaps should have left when the rest of the girls did, because at some point it seemed like a good idea to ride the mechanical bull. Stef went first, and last. The a-hole DJ turned it up super-fast and it swung her around, knocked her in the head and threw her off. She thought she lost a tooth. Luckily she did not, but I’m sure she is sporting a very large and painful bruise on her jawline, but she Cowboy’d Up and didn’t even cry. I chewed his ass out for that stupid maneuver, I think he was afraid I was going to tell the owner on him or something. He said it was an accident, but I’m not sure I believe that. Whatever, I’m just glad she’s okay, and that she went first; if I had gotten knocked off like that I would have ended up in the hospital, I’m sure – I’m not nearly as bouncy as young Stefanie! I did give Stefanie the movie Urban Cowboy, which just happened to be riding around with me in my car for the past few months (don’t ask why).

The big exciting news of the week is that Kenny and his friend Jim finally found and rented some very suitable office space for their businesses. It’s very close to home, 3,000ish square feet with three separate offices, a waiting area, a kitchen, bathroom and a very large storage area for all their stuff. Kenny’s going to make a man room out of one of the offices, complete with flat-screen t.v. and a pinball machine. He informed me there won’t be a flower to be found in the entire place. It’s a man zone. He’s excited, and I’m excited for him. Plus, it means the basement and garage are going to be emptied out! Which means – possibly, maybe, just maybe – we might have room to park cars in the garage by next winter, and makes it slightly more reasonable for me to buy the convertible I have my eye on for the spring! I need a place to keep it during the winter months, don’t want to just leave her sitting out in the cold and snow – she’s a warm-weather kinda girl. Or will be, if or when I ever get her. Anyway, regarding the office space, we’re going to give some of the rooms a fresh paint job, so that should keep us busy for the next couple of weeks. I don’t mind some new painting projects, that will be rather fun for me.

Regarding my Resolutions. I have made some mental revisions and here they are – it’s cheating a little bit since I’ve already accomplished one of them (line dancing).

1/ Try Something New – Line Dancing! And I want to go back, so hopefully this will be something that I am somewhat proficient at by the end of the year. I wouldn’t mind going two or three times a month for a while, it’s very fun.

That’s it, along with the others sans the sex thing. That was just crazy talk.

So another week wraps up and here we are again. No closer to finding the Meaning of Life, but all-in-all happy with where I’m at right now. I did ask Timmy if he was happy with where he was at in life and he responded, “I don’t think I’m going to amount to much more than this.” It made me laugh out loud, which is really what the importance of living boils down to – laughing with friends every chance you get. It helps to balance things out when life is a hotmess.

Kenny just got home from a wedding and he followed the wedding rules I established for him – cake is in the house! I believe I will go sample a few bites momentarily.

Peace. I tried to come up with a new sign-off for ’08, but then decided that a little consistency isn’t a bad thing.