2008 roared in with a bang – right over the Planet Hollywood casino in Las Vegas for us! It was a very fun time being in Vegas for New Year’s Eve – Lileks put it best: Vegas! Soulless, thrilling, teasing, Vegas!

Twinkle packed himself and was ready to go with us again: 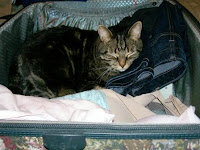 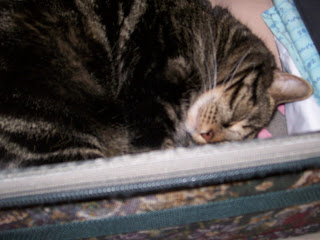 Overindulgence was the word of the trip – late nights blurred into early mornings of gambling & drinking. We all had, as Rusty calls it, “meat sweats” from the amount of beef that was consumed. Three-hundred dollar dinners were the norm – good wine, great food, great company. Of course, Kenny “Lucky Pants” won $3000 on a video poker machine. No gaming story would be complete without a “Kenny Wins” story. 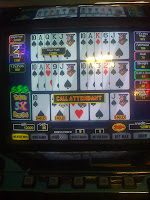 The view from our room at Paris was really nice, we overlooked the pool and Eiffel Tower.

Our fancy party invitation came to life, with real “fairies” all over the grand ballroom. 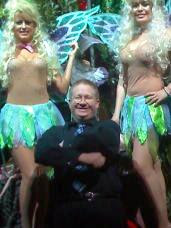 Las Vegas actually closed down Las Vegas Blvd to accommodate the crowds that would fill the streets as it drew closer to midnight. Kenny was excited to stand in the middle of the street. Of course, he was also a little drunk, which may have made it seem that much more exciting. 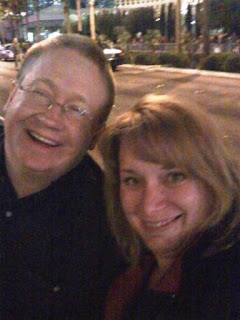 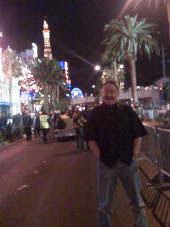 All-in-all, it was a really fun trip, and by far the most fun New Year’s Eve I’ve ever spent. And our flight home was the best, somehow we lucked into an empty seat in our row so we were able to sprawl out in complete comfort. And now it’s officially 2008, and I’m hopeful that it’s going to be great!

The return to normalcy was a little rough, getting back into the work schedule and just doing everyday life stuff. We did a bit of grocery shopping today, some laundry and such, and I made what I believe will be a life-changing purchase today: a Palm Pilot. I have grandiose ideas that it will keep me hyper-organized and on-track with dieting, budgeting, novel-writing – all of it! It has a lot of responsibility on it’s very slim shoulders. She’s charging up right now, I need to figure out how to use it – along with my MP3 player, which I haven’t figured out yet, either. This is the big electronics weekend for me – it’s all on my resolution list.

Speaking of resolutions, I’m pretty happy to report that I did in fact achieve some of my goals last year. The house is entirely painted, the back room is somewhat organized (some crap on the bed needs to be put away, but overall it’s in pretty good shape), the house is getting where I want it to be. I actually wrote some book paragraphs, contrary to Mr. Murdoch’s prediction that I would be no farther along at the end of the year than I was at the beginning. Now, it’s not much, to be sure, but it’s something and it is a start. I have more goals for that this year, but I’ll get into that in a bit. I’ve also managed to get my back nerve issues under control and I stopped being chronic pain girl in 2007. I joined a gym – and have actually used it on a rather regular basis. All those things I am very proud of accomplishing – so I get a self-clap for that!

My goals/resolutions for this year may be a bit harder to accomplish, I’m ramping up my expectations of myself a bit. I’ve already semi-failed on my first resolution, which was to have sex every day. I had just read an article in Glamour about a couple who tried that, so I thought, “Why not?” Why not indeed. It’s actually a bad decision. Bad, I say. Don’t try it – trust me, you’ll just want to go to bed and watch House Hunters three days into it all. I’ve forged ahead, as Kenny has been quick to remind me, “Nobody likes a quitter,” but tonight will probably be the end of that resolution. Maybe not the end, but definitely a revision.

My other resolutions haven’t had a ton of thought, but I’m putting them down here and hoping for the best. Here goes:

1/ Gym – 3 times a week, minimum. Add 20 minutes of some form of cardio to the Pilates routine I’ve been doing.

2/ Book – have a strong outline and 2 chapters written by year end.

3/ Budget – track spending for a month as advised by Meggan (on my new Palm Pilot!), formulate a savings plan to see what is achievable within the next 5 years. My short-term goal/desire is to buy that cute little convertible I want this coming spring. Now, I could do that now, but I don’t want an extra little fun car to infringe on my vacationing, so I need to do a bit of planning to get there.

4/ Read more books. Last year I sadly – and yet happily – read four books, which is more than I have in the past few years. But still not as many as I would like to get through – I really enjoy reading, but watch too much television just because it’s a mindless way to keep entertained. But I made strides last year, and I’m sure I can do even better this year. Or at least the same, that would be acceptable as well. But not less. Too many good novels out there to let pass me by.

I think four is plenty, that’s not even counting that crazy daily sex idea. I saw a commercial on t.v. that was mocking resolutions and the three they mocked were all mine – organize, lose weight, write a novel. I’m officially not very original. Except for the sex thing 🙂 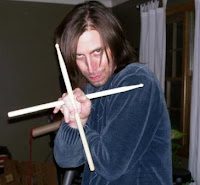 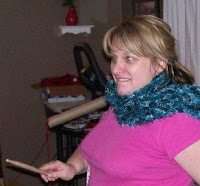 We all slept til noon on Saturday. The boys are back out again tonight at Fox & Hound in Parma watching football, but I declined the invite and opted for home and the couch instead. I just watched We Are Marshall for the first time – what a good movie! I cried and shouted along with the team.

The cats had to get their obligatory New Year’s Photos. I could only catch three of them, Widda and Stanley were having NONE of it. 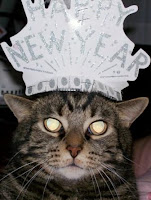 Peace, and on behalf of Kenny, the cats and myself we wish you a Great 2008!