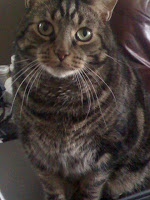 There he sits, Ruler of the Roost. He is one bad motherfucker, he of the name Twinkle Toes. I will miss him while we’re gone for the next couple of days. We leave in a couple of hours, I’ve allowed myself a couple quick minutes to blather on about the holiday and miscellaneous whatnot.

Kenny and I just had a quick argument about packing – he asked me to pack some stuff for him in with my suitcase, to which I adamantly refuse to do so. He is too messy. When I have packed his stuff with mine in the past, I thought my head would explode on vacation as he rooted around in the luggage, disheveling all of my carefully folded clothing items while he dug for a pair of clean underwear. So no, the answer is no: I will not “just throw some stuff for you into my bag.” No matter how nice he asks, or how whiny. It’s a very messy person who makes ME look like a neatnik. He succeeds in making me look very tidy.

Quick hair update: I went to the salon to meet with owner and their Redkin professional colorist, who happens to be Meggan’s gal. I was on the border of irate, but they at least didn’t insult me by trying to tell me the color looked good. So Mary, the colorist, made some sense when she said that if they just refund my money without my letting them try to fix it, I’ll still have to walk around for the next few weeks with that horrible color on my head. Long story short, I agreed to let her try it, and while it doesn’t look bad, it still isn’t Sara Hair. It’s too light now, but that’s because she didn’t really know what she was aiming for . Hair color trauma/drama is just ridiculous, but when you’re paying a lot of money, you should get professional looking results. Which I did not, and still do not have, but she did spend a lot of time on it and tended to it with care, which I appreciated the effort being made. Course, it naturally ended up costing me more money – I couldn’t let her work on my head for 2 1/2 hours and NOT tip her, it wasn’t her fault that it was fucked up to begin with. She tried to insist “no” on it, but I guess I was out to prove I wasn’t an unreasonable asshole and insisted she take it. So now my so-so hair has set me back $182. I felt the cock pull out of my asshole after they shoved that one up there. Too graphic?? Apologies to the delicate.

Thanksgiving was a delight. We went to Kenny’s grandparent’s house, taking my grandmother Sophie with us. Very good food, very good fun all the way around. Kenny and I took Mapleside Farms apple and blackberry pies, as well as a sweet potato casserole I whipped up. Since we’re leaving today we weren’t able to capitalize on the leftover situation – drat.

Margie did impart a useful tip ‘o the day for us: If you’re stuffed from too much stuffing, a little snifter of Creme de Menthe will rid you of that overly “full” feeling. We each sipped a little shot of that, and lo’ and behold, we were able to shovel more food into our gullets before too long. So we enjoyed 3 flavors of pie with some cinnamon ice cream on top. Yum! Then we drank more Creme de Menthe. Margie argued with me that it was pronounced “cream,” and not “creme” and I pointed out that’s because she’s a hillbilly and thinks it’s pronounced “cream de mint-aye.” 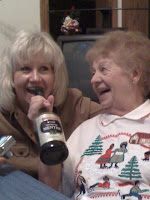 Alright, I’ve used up my allotted blogging minutes, I must dash and pack clean underwear and kiss cats. Newfie has been delivered to the vet, she took another turn for the worse last night, she’s coughing up spittle again and not eating. I am glad she’s in the hands of the vet while we’re gone.

Peace, and give thanks for all that’s good in your lives!