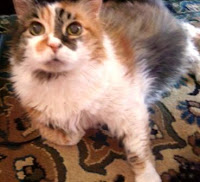 Newfie is in the Animal Emergency Hospital at the moment. I believe she had a blood sugar crisis, not exactly sure what type of problem, but I do know it’s not good. She spent last night “spitting up,” for lack of a better description. She coughed and gagged most of the night, but nothing ever really came up, other than some spittle. Nothing too concerning on it’s own.

While she’s never been considered active, today her inactivity stood out. She was okay at breakfast, she got her insulin shot but didn’t want to eat. Not too unusual for her. Tonight she was sitting under Kenny’s feet while he was recording some commercials for the radio show tonight and he noticed she was extraordinarily lethargic. He picked her up and took her to the water dish and she peed all over the floor – her bladder just gave out. Kenny’s so good to her, he really is a very good cat daddy, and he cleaned it up and got her some food, trying to raise her blood sugar and help her snap out of it. I was on the phone with the Emergency Clinic.

They gave me directions and I drove while Kenny held her. She was limp in his arms and I was verging on slight hysteria. We got her in there and the guy at the desk was on the phone with someone else and another family that looked bereft was waiting at the other end of the counter. Well, Newfie started convulsing in Kenny’s arms while we were waiting, and I completely lost it – I was crying and screaming, a bunch of people rushed out of the back and whisked her away. The other family ran out of there very quickly when all that started – don’t know if it was Newfie convulsing or my hysterical sobbing that caused them to race out as fast as they could, but it was a very dramatic situation going on there. I am officially horrible during a cat crisis – I totally fall apart.

So now she is spending the night at the emergency clinic, she’s receiving an IV sugar drip, a drip for her slight dehydration, and who knows what else. Her blood work came back somewhat promising, nothing too askew, but I had another little breakdown because we think she may have gone blind from the seizure. She was moving her head back and forth in a really odd pattern and didn’t blink no matter what we did – not focusing on anything, either. The doctor told me that often that straightens out once the swelling in the brain goes down. I hope so, I am keeping it together for the moment by clinging to that note of hope. No sense in having a meltdown until I know it’s warranted.

I have to pick her up in the morning between 7 and 7:30 and take her to my regular vet. I’m so happy that I have a presentation at work at 10:00 a.m. tomorrow – what lucky timing for me. Especially if they give me some bad news to cope with. I am just drained, very stressful situation for me. I’m just thankful I have Kenny to stand by me during these times – he’s a very, very good cat daddy and has been a very solid strength when I’ve had cat calamities.
I hope for good news with the dawn of a new day, and that this was just an isolated incident and she’ll be back on track.