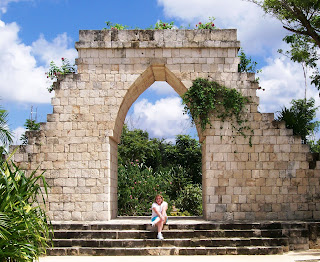 How many weeks have I been back from vacation now? Seems like forever ago. It’s been hard to get back into the groove and I was waylaid by some type of bug that had me missing 2 days of work this past week. I’m sure it had something to do with the recycled germs on the plane or something caught from the myriad of cruisefolk. Still worth it, though.

So it’s been a weird couple of weeks to say the least.

We visited our friend Dan this weekend, he had knee replacement surgery a week ago and came home from the VA on Thursday. He’s my real-life hero. He lost part of a leg in Vietnam when he stepped on a landmine and now his remaining “good” knee failed him. Life is not for sissies. I don’t claim to know much about the Vietnam war, but it’s often likened to the Iraq war going on today. I see that. What are we doing there exactly? I’m not sure. All I know is that our good people are going and fighting and doing as they’re told, and for that I offer them my support and unending loyalty. I don’t claim to have the answers or solutions to any of it, but I stand behind our troops – past and present – and thank them for doing a job I’m fortunate enough to have never had to do. Dan’s my hero because he came back home and made another chapter in his life after all that. That’s strength and courage.

So anyway, I digress. Dan’s doing incredible, he’s up and walking around already and said the only bad part of the whole ordeal was he opted for a nerve block rather than anesthesia. He said he was doing fine until they started up the saw. Maybe something to consider if anyones having surgery – a nerve block doesn’t block out sounds, and there’s just some things you might not want to hear.

Kenny and I made our holiday plans. We’re going to be visiting Uncle Caesar over Thanksgiving and our Aunt Paris for New Year’s Eve. They’re always happy to see us!

My grandmother Sophie mentioned a butcher shop in Euclid that has supposedly substantial savings on meat, she’s seen it advertised on the television. She’s mentioned more than once that she’d like to get some chicken from there, but it’s not exactly around the corner from me – or her! I finally called them today to see just how good the savings are, and they do warrant a trip out there to check it out. I wanted to make sure that I’m not spending $20 in gas to save Sophie $2. Which is basically what it will be anyway, regardless of the savings offered on chicken thighs. By the time I drive 30 minutes further East to Euclid and drive the “bargains” an hour West back out to her, it will be a half a day and a tank of gas in my guzzling SUV. But that doesn’t matter, you’d have thought I had reached into the heavens and handed down the Christmas Star to her when I called her back and told her I’d make the pilgrimage next Saturday for her. They have broccoli for 39cents a bunch. Who can pass that up?

I’ve been busy writing a speech for Toastmasters on Tuesday. I’ve been struggling with a topic and have concluded that basically I’m a crap-ass writer and have no business even thinking of writing a book. It’s HARD to write and make sense. Finally, around 11:00 last night, I branched off onto an entirely new topic and whipped something up. I decided to write about Sophie, how she’s been ‘green’ long before Al Gore invented it. We’ll see how it goes on Tuesday. I just don’t feel very creative lately, I have writers block. I loosened the block with a half bottle of wine last night, and that seemed to help. If I ever do write a book, I’ll be a full-fledged alcoholic by the time I’m done. By the way, I do have a first paragraph down, Rob. I dedicated myself to doing something, good or bad, because I haven’t forgotten my vow to you. I will have something typed before the end of the year! It may suck, but it will be something.

Other than that, I purchased a new DVD, “Anyone Can Dance,” to teach myself some groovin‘ moves so I can tear up the dancefloor when we go out. Because, ya know, we do that so often ~~insert sarcastic tone here~~. But anyway, I figured I’d teach myself a few smooth moves in the privacy of my living room and then delight the crowds in some imaginary disco. Well, there is officially no Black Blood in my genes. I have so little rhythm, I’m surprised I can get the movements down to even fuck. I’m rhythmless when in the vertical position. I’m going to keep trying, but I have very little confidence in spite of the encouraging title.

That’s my ramblings for the week. Peace and do something that makes ya want to get your own groove on!